A Caress of Twilight is the second novel in the Merry Gentry series by Laurell K. Hamilton. 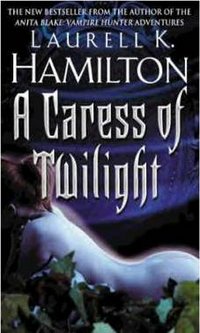 A faerie[princess turned private investigator in a world where faeries are not only known to the general public, but are also fashionable, the title heroine is Princess Meredith NicEssus, also known as Merry Gentry. As niece to Andais, The Queen of Air and Darkness, she is a royal of the Unseelie Court . While her aunt tried to kill her as a child, she has since offered her the title as crown princess as the Court needs more heirs.

A Caress of Twilight begins a few months after the events of A Kiss of Shadows. It is December, and Merry and the Sidhe warriors she has chosen as her lovers have returned to Los Angeles, California. Merry has resumed working for the Grey Detective Agency and several of the Sidhe have also joined the payroll.

Merry is approached by Maeve Reed, previously known as Conchenn before her exile from the Seelie Court and now a famous Hollywood actress. Maeve asks Merry to perform a fertility rite that will permit her to have a child by her dying human husband. In return, she tells the princess that the reason for her exile was that she had refused to become the wife of Taranis, King of Light and Illusion, because she believed he was sterile.

Galen, badly injured by the demi-fey during A Kiss of Shadows, has yet to heal, despite the usually phenomenal healing abilities of a sidhe warrior. Merry approaches the Queen of the Demi-Fey, Niceven, regarding a cure. The price of the cure and an alliance is a weekly drink of Merry's blood by a surrogate to be chosen by Niceven.

During Merry's first night in bed with Doyle, they are interrupted by Andais who reveals that the Nameless has been freed. The worst of both courts, the Nameless was the last great spell that Seelie and Unseelie had cooperated upon. They had stripped themselves of everything too awful for them to be permitted to stay in the United States, and from it had been formed the Nameless.

A strange murder brings members of the Grey Agency, including Merry, to the scene. However, their presence is challenged by others of the police force and they are thrown off site. However, this is not before they have a chance to suspect that supernatural forces are at work. It is suspected that the lives had been sucked from the murder victims by the ghosts of dead gods. Nothing is said to the police, however, as the only known person to work such a spell was a sidhe and, if it were discovered, that fact could result in all sidhe being banished from the country.

Healed from his injuries by Niceven's representative, Sage, Galen acts the part of the Green Man in the fertility ritual with Merry which results in Maeve Reed becoming pregnant.

It begins to become clear that Taranis is also planning something as various social secretaries insist upon Merry attending first the Yule Ball and then a feast in her honour. This culminates in a conversation between Merry and Taranis himself.

Finally, the Nameless attacks Maeve Reed's home. It is finally defeated by Merry and her companions, Merry herself showing for the first time her second Hand of Power - the Hand of Blood. The result of the destruction of the Nameless is the release of the magics which formed it; these magics transfer themselves to the victors, who begin to exhibit unforeseen side effects.

Characters in A Caress of Twilight

A Caress of Twilight features the following major characters.

The death toll in A Caress of Twilight includes:

Part of this article consists of modified text from Wikipedia, and the article is therefore licensed under GFDL.
Retrieved from "https://www.monstropedia.org/index.php?title=A_Caress_of_Twilight&oldid=8448"
Categories: