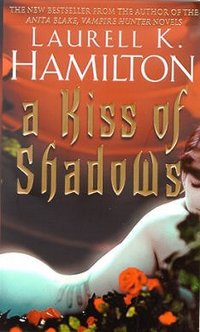 A Kiss of Shadows is the first novel in the Merry Gentry series by Laurell K. Hamilton.

A faerie princess turned private investigator in a world where faeries are not only known to the general public, but are also fashionable, the title heroine is Princess Meredith NicEssus. As niece to Andais, The Queen of Air and Darkness, she is a royal of the Unseelie Court, however having fled the court three years before she has been hiding herself under the name of Merry Gentry and working as a private investigator for the Grey Detective Agency.

The story begins in Los Angeles, California, in a world where magical creatures are "out of the closet" and, in some cases, even legal. Princess Meredith NicEssus is working for the Grey Detective Agency under the assumed name of Meredith 'Merry' Gentry. When two women come to the agency with a story about fey-wannabes and rituals involving fey women, Merry goes undercover to investigate. However, she and her colleagues get more than they bargained for when it is discovered that the culprit is using Branwyn's Tears, an oil that can make a human into a sidhe lover for a night, and turn even a sidhe or a sidhe-decendant into a sexual slave.

In the process of solving the case, Merry's secret is revealed, and she finds herself being hunted by the Sluagh. Brought to see their King, Sholto, he offers Meredith a deal. Himself disapproved of by Andais, Queen of Air and Darkness, because of his mixed blood, he proposes an alliance between the two of them. However, jealous at the idea of the princess becoming his lover, Merry is attacked by Sholto's harem of nighthags. During the fight Merry's Hand of Flesh is revealed when one of them, Segna the Grey, becomes nothing more than a ball of flesh.

Shocked, Merry tries to flee, only to find herself trapped. It is at this point that Doyle, Captain of the Queen's Ravens, appears. He announces that the Queen never sent the Sluagh out after Meredith, and that in fact the Queen meant her no harm. As prove of this he produces the Queen's sword Mortal Dread, as well as the Queen's mark, which he transfers to Merry in a kiss.

Merry returns with Doyle to the Court. There she is reunited with both friends and enemies. The Queen reveals that she wishes for her bloodline to continue upon the throne. For that to happen, she is willing to take as her heir whoever of Meredith or her cousin, Cel, can first produce an heir. She lifts the geas of celibacy upon her Ravens for Meredith alone, insisting that she choose at least three or even more in order to increase the chance of her becoming pregnant.

While this offer would permit Merry to end her self-imposed exile and return home, it also brings with it its own dangers. Cel, previously his mother's sole heir, makes several attempts upon her life. It is in order to gain support that Merry makes alliances with others such as Kurag, the Goblin King.

Finally, it is revealed that Cel was behind the Branwyn's Tears incident in LA, something illegal by current laws. In punishment, he is to be confined for six months after being coated with the oil himself, something akin to torture.

A Kiss of Shadows features the following major characters.

The death toll in A Kiss of Shadows includes:

Part of this article consists of modified text from Wikipedia, and the article is therefore licensed under GFDL.
Retrieved from "https://www.monstropedia.org/index.php?title=A_Kiss_of_Shadows_(novel)&oldid=8447"
Categories: