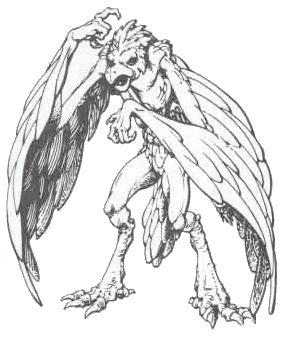 The aarakocra are a race of bird-like monstrous humanoids in the Dungeons & Dragons fantasy role-playing game. They first appeared in the Fiend Folio (1981). They have since been revised and adapted to many further campaign settings in the D&D game, including Dragonlance, the Forgotten Realms, and Dark Sun.

The average aarakocra stands about five feet tall and has a wingspan of twenty feet. Halfway along the edge of each wing is a hand with three human-sized fingers and an opposable thumb. An elongated fourth finger extends the length of the wing and locks in place during flight. The hands cannot grasp while flying, but are nearly as useful as human hands when an aarakocra is perched and its wings folded back. Their powerful legs end in four sharp talons that can unlock and fold back to reveal another pair of functional hands. These humanoids have hollow, fragile bones. Their faces combine the features of both parrots and eagles. They have gray-black beaks and black eyes. Plumage color varies, but males generally have red orange and yellow coloration, while females tend towards brown and gray.

Aarakocra live among the highest mountain peaks in small tribes which control hunting territories and share a communal nest. The eldest male serves as leader, the second oldest as shaman.

Living amongst the mountains of Krynn, aarakocra are rivals of the kyrie and often fight over living space, especially those tribes on the island of Karthay where aarakocras have been known to work with minotaur barbaric tribes to hunt kyrie. Aarakocras that live in the Abanasinia region often trade with the phaethons that live among the Sentinel peaks.

Aarakocra in the Forgotten Realms

Aaracokra feature statistically only in the Forgotten Realms campaign setting in Third Edition D&D. In this setting they are thought to be an immigrant race to Faerûn from Maztica. In Faerûn this rare people have just four estabished colonies—in the Star Mounts in the High Forest, in the Storm Horns in Cormyr, in the Cloven Mountains on the Vilhon Reach, and in the Mistcliffs in Chult. However the Star Mounts colony has been almost wholly destroyed by a green dragon called Elaacrimalicros.

In the World of Greyhawk setting, aarakocra are known to inhabit the Lortmil and Yatil Mountains.

In the Dark Sun setting, aarakocra are one of several player character races.

Part of this article consists of modified text from Wikipedia, and the article is therefore licensed under GFDL.
Retrieved from "https://www.monstropedia.org/index.php?title=Aarakocra&oldid=8675"
Categories: