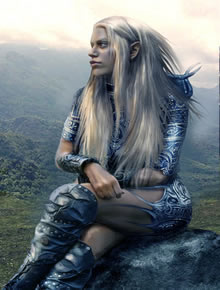 An aasimar is a creature in the fantasy role-playing game Dungeons & Dragons. Aasimar are "planetouched"; that is, they are mortal creatures that have in their blood some otherworldly characteristics. Aasimar are descended from devas, angels and other creatures of pure good alignment; although their celestial ancestor may be many generations removed, their presence still lingers. Aasimar are predisposed to Good alignments, but they are by no means always good.

The evil-alignment-derived counterparts to aasimar are called tieflings.

Aasimar often have some quality hinting to their otherworldly heritage, such as a golden skin tone, an unusually intense stare, silver eyes, and the like.

Aasimar in the Forgotten Realms

In the Forgotten Realms campaign setting aasimar are most common in the eastern lands of Unther and Mulhorand, where they are the descendants of the good deities who walked among the mortals there.

In the Planescape campaign setting, aasimar are a race available to player characters, though they are often viewed with contempt or fear by creatures not of good alignment.