An Aatxe is an evil spirit in the shape of a red or fiery bull which, the Basques believe, leaves its cave on stormy nights to wreak havoc and destruction. It is also capable of assuming human form. 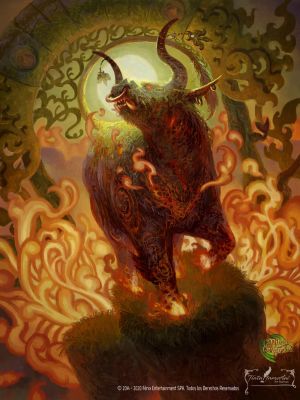 The name Aatxe translates into English as young bull or simply calf. It is sometimes called Aatexegorri or Etsai, meaning red calf, due to it's reddish color.

Aatxe is a cave-dwelling spirit who adopts the form of a young red bull. At night, more so in stormy weather, he arises from the hollow which is his lair. He attacks criminals and other malevolent people. He also protects people by making them stay home when danger is near. Aatxe are capable of assuming other forms, among the most common of which are that of a man, goat, pig, horse, or even a dragon.

Basque folklore tells that the Aatxe originates from the underground world of Euskal Herria, and he is identified with the goddess Mari, possibly as a manifestation of her will. Mari is "quick to punish those that lie or cheat and generally the wrath of Aatxe is directed at those people who have lied, cheated, stolen or been generally disrespectful. There is an old Basque witches song that includes the line, 'Yaun Gorril, Yaun Gorril" which is translated as "Lord Red, Lord Red". It is most probably referring to Aatxegorri and including him as an important entity in the pantheon and belief system of the pagan Basque."

It is believed Aatxe inhabited caves and hollows; in many (Isturits, Sare, Errenteria, among others) engravings and paintings depicting aurochs, bulls, and oxen have been found; which implies that this Basque myth has its origins in the Paleolithic. These animal-shaped geniuses represent the forces of the earth, and natural phenomena are attributed to them. The Aatxe is the guardian genius of Grottes de Sare (Sara's Cave), France.