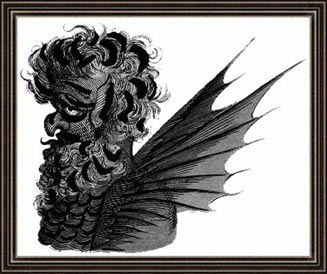 Abaddon, in demonology, was chief of the demons of the seventh hierarchy. He was called The Destroyer and in the Book of Revelation the Evangelist St John called him the King of the Grasshoppers. The Thanksgiving Hymns (a copy was also found in the Dead Sea Scrolls) tells of "the Sheol of Abaddon" and of the "torrents of Belial [that] burst into Abaddon". The Biblical Antiquities of Philo' mentions Abaddon as a place (sheol, hell), not as a spirit or demon or angel.

The Hebrew word abaddon means "place of destruction" Job 26:8 and Psalms 88:11. The role of Apollyon in biblical references is ambiguous, sometimes being described as a good angel who serves God, and sometimes also being described as a fallen angel who succumbed to evil. The word Apollyon and its variations are sometimes used to mean a place perhaps Hell itself (in the Old Testament the name Abaddon is used for the place of the dead). The word Abbadon is also used for Hell in rabbinical literature. Abaddon has also been considered the Hebrew name for the Greek god Apollyon.

In magic and alchemy, Abaddon is the Destroying Angel of the Apocalypse.

The seventh mansion the Furies possess, which are powers of evil, discords, war and devastations, whose prince in the Revelations is called in Greek Apollyon, in Hebrew Abaddon, that is destroying and wasting, "Occult Philosophy", Book 3, Chapter 18 [1]

The biblical verse cited by Agrippa is Revelation 9:11, which says: "And they had a king over them, which is the angel of the bottomless pit, whose name in the Hebrew tongue is Abaddon, but in the Greek tongue hath his name Apollyon." Cornelius Agrippa was the one that equated Abaddon with Apollyon, and positioned him as the monarch in the lower shadow of the sphere of the planet Venus, which is the Sephirah of Netzach on the Kabbalistic Tree: As described in Revelation, Apollyon opens the gates of the abyss and unleashes upon the earth his swarms of demons locusts, who then proceed to torture those of mankind who do not bear the seal of God upon their forehead. After that, he is supposed to seize Satan himself, bind him and toss him into the bottomless pit for a thousand years.

"But the teachers of the law from Jerusalem said that he (Jesus) was possessed by Beelzebub, and that it was only by means of the ruler of the demons that he cast out demons. So he called them over, and using metaphors asked them: 'How can Satan cast out Satan?'" Mark 3:22, 23,

Abaddon’s Tarot symbol is the Judgment [2]

In occultism and esoterism, Abaddon is related to blood red, brown and green colours, winter, the month of January, Saturday, intuition, sacrifice and challenge, the ruby and the sword.

Abaddon/Apollyon is the chief of the demons of the seventh hierarchy, the king of the grasshoppers, or demon locusts (described as having the bodies of winged war-horses, the faces of humans, and the poisonous curved tails of scorpions).

Abaddon is in command of the Sixth House of Hell, Demonic Ruler of the Abyss.

Abadon is one of the kings that has ruled over the nations of the earth. The scriptures indicate that he ruled over both Egypt and Sodom at some point in history, and will endeavour to rule over Jerusalem in the final days. Jerusalem will figuratively be called Sodom and Egypt at that time. At the end of times he is given the key to the abyss and releases these demon hordes on the people of the earth

Not long after Judeo-Christian teachings taught the name of this demon, Abaddon referred to the pit or cave that was used in mystery religions and schools as a rite of passage into the greater mysteries. Often the experience would entail the use of ritual substances that put the aspirant into an altered state in which he or she could receive divine revelation. Because the experience was sometimes unpleasant, this rite came to be viewed as being "hellish." However, it was considered absolutely necessary so that the seeker may become pure enough to encounter the "mind of God", as an angel is described as the "Angel of the bottomless pit who binds Satan for a thousand years".

Apollo-Python was the serpent deity in the Pit of the Delphi oracle who inspired the seeress with mystic vapors from his nether world. Abaton was the Greek word for Pit, which the Hebrews changed to Abaddon, which later became synonymous with the Christian hell.

Abaddon is an enigma. At times, he is an angel of judgment, not of satan but of God, destroying at God's bidding. Both Heaven and Hell claim him as an ally, other times as an enemy. It is clear that he is the angel who will command the monstrous horde from the Abyss that will rampage over the earth in the tribulation period as Judgment approaches. What is not clear is whose orders he will be following at what time. To hear him described by Daniel, he would be the Anti-christ, but many disagree.

Part of this article consists of modified text from Wikipedia, and the article is therefore licensed under GFDL.
Retrieved from "https://www.monstropedia.org/index.php?title=Abaddon&oldid=14469"
Categories: