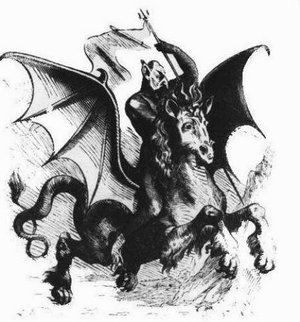 Abigor is a Great Duke of Hell ruling sixty legions of demons.

Abigor discovers hidden things and knows the future of wars and can instruct leaders of the ways to earn their soldiers' respect. He also attracts the favours of lords, knights and other important persons.

Abigor is depicted in the form of a goodly knight carrying a lance, an ensign and a sceptre (a serpent to some authors, most notably Aleister Crowley). Alternatively he is depicted as a ghostly spectre, sometimes riding a semi-skeletal (sometimes winged) horse, or the Steed of Abigor. This is a minion of Hell itself, and was a gift from Beelzebub. It was created from the remains of one of the horses of The Garden of Eden.

Eligor, alias Abigor, is a great duke, and appeereth as a goodlie [handsome] knight, carrieng a lance, an ensigne, and a scepter: he answereth fullie of things hidden, and of warres, and how souldiers should meete: he knoweth things to come, and procureth the favour of lords and knights, governing sixtie legions of divels. Pseudomonarchia daemonum - Johann Wier (1583)

The Fifteenth Spirit in Order is Eligos, a Great Duke, and appeareth in the form of a goodly Knight, carrying a Lance, an Ensign, and a Serpent. He discovereth hiddenthings, and knoweth things to come; and of Wars, and how the Soldiers will or shall meet. He causeth the Love of Lords and Great Persons. He governeth 60 Legions of Spirits. His Seal is this, etc. Goetia - S. L. MacGregor Mathers (1904)