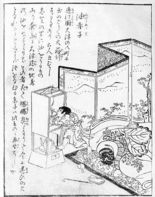 The natives say that long ago in the village of Shiga there was a person who stole oil, and every night he stole the oil from the Jizō of the Ōtsu crossroads, but when this person died his soul became a flame and even now they grow accustomed to this errant fire. (土人云、むかし志賀の里に油をうるものあり、夜毎に大津辻の地蔵の油をぬすみけるが、その者死て魂魄炎となりて今に迷ひの火となれるとぞ。

If it is so then the baby which licks the oil is this person's rebirth. (しからば油をなむる赤子は此ものの再生せしにや。

Sekien seems to have based this image on a story from the Shokoku Rijin Dan, published in 1746, in which an oil merchant who steals oil from the Jizo statue at the Otsu crossroads is punished by being transformed posthumously into a ghostly flame.