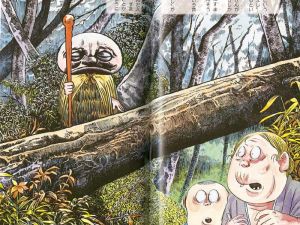 Abura-sumashi (油すまし, "Oil Presser") is a creature from the folklore of the island of Amakusa in Kumamoto prefecture (Japan).

The abura-sumashi's name can be translated as "oil wringer", from abura (oil) and sumasu, a word from Amakusa dialect which means to "press, wring, or squeeze". It seems to be related to the production of katashi-abura ("hardship oil", taken from the seeds of the Camellia sasanqua plant) which was once prosperous in the Kawachi district of the island.

In modern media the abura-sumashi is often depicted as a squat creature with a straw-coat covered body and a potato-like or stony head, an appearance inspired by the artwork of Mizuki Shigeru.

This spirit, which surprises people on the Kusazumigoe mountain pass, is thought to be the ghost of a human who stole oil. In the days before electricity, oil was a very valuable commodity, necessary for lighting and heating a house. As such, the theft of oil, particularly from temples and shrines, could lead to punishment via reincarnation as a yokai. According to the story usually told about this spirit, an old woman was once walking her grandchild along this pass, when she recited a story she'd heard, in which the abura-sumashi would appear in that place, dangling an oil bottle. At that moment the abura-sumashi showed up, proclaiming that he may still appear.

This story was introduced to Japan by Yanagita Kunio, who in turn took it from the work of one Hamada Ryuichi, a folklorist who lived on Amakusa. This yokai attained considerable popularity by appearing in the work of cartoonist Mizuki Shigeru.