A.A. Barb connected Abyzou and similar female demons to the Sumerian myth of primeval Sea. Barb argued that although the name “Abyzou” appears to be a corrupted form of the Greek word abyssos ("the abyss"), the Greek itself was borrowed from Assyrian Apsu or Sumerian Abzu, the undifferentiated sea from which the world was created in the Sumerian belief system. The word also appears in the Christian scriptures, occurring six times in the Book of Revelation, where it is conventionally translated not as “the deep” but as “the bottomless pit” of Hell. Barb argues that in essence the Sumerian Abzu is the “grandmother” of the Christian Devil.

The names of Abyzou

In the Jewish tradition she is identified with Lilith, in Coptic Egypt with Alabasandria, and in Byzantine culture with Gylou, but in various texts surviving from the syncretic magical practice of antiquity and the early medieval era she is said to have many or virtually innumerable names.

In one magic-related text, the archangel Michael confronts Abyzou and compels her to tell him the 40 names that can control her. In magico-religious practice, the knowledge of the secret name of a deity, divine force, or demon offers power over that entity.

In the Testament of Solomon, the demon herself declares that she has ten-thousands of names and forms, and that Raphael is her antithesis. She says that if her name is written on a scrap of papyrus when a woman is about to give birth, “I shall flee from them to the other world.”

Variants on the name of Abyzou appear frequently in charms in languages such as ancient Greek, Hebrew, and Romanian.

Abyzou is pictured on amulets with fish- or serpent-like attributes. Her fullest literary depiction is the compendium of demonology known as the Testament of Solomon, dated variously by scholars from as early as the 1st century A.D. to as late as the 4th. In the late antique Testament of Solomon, Abyzou (as Obizuth) is described as having a “greenish gleaming face with dishevelled serpent-like hair”; the rest of her body is covered by darkness.

In The Testament of Solomon, the speaker (“King Solomon”) encounters a series of demons, binds and tortures each in turn, and inquires into their activities; then he metes out punishment or controls them as he sees fit. Put to the test, Abyzou says that she does not sleep, but rather wanders the world looking for women about to give birth; given the opportunity, she will strangle newborns. She claims also to be the source of many other afflictions, including deafness, eye trouble, obstructions of the throat, madness, and bodily pain. Solomon orders that she be chained by her own hair and hung up in front of the Temple in public view. The writer of the Testament appears to have been thinking of the gorgoneion, or the icon of the Medusa’s head, which often adorned Greek temples and occasionally Jewish synagogues in late antiquity. Abyzou was traditionaly blamed for miscarriages and infant mortality and was said to be motivated by envy (Greek phthonos), as she herself was infertile.

Abyzou is depicted and named on several early Byzantine bronze amulets. With her hands tied behind her back, she kneels as she is whipped by a standing figure, identified as Solomon or Arlaph, called Afarof in the Testament of Solomon and identified with the archangel Raphael. On one amulet, the figure is labeled as Arlaph, but an inscription reads “The Seal of Solomon [is] with the bearer; I am Noskam.” The reverse inscription is written within an ouroboros, the symbol of a snake biting its tail to form a circle: “Flee, flee, Abyzou, [from] Sisinios and Sisinnia; the voracious dog dwells here.” (St. Sisinnios sometimes takes the Solomon role on Christian amulets.) Although Abyzou is regarded mainly as a threat to child-bearing women and to infants, some of the names of those seeking protection from her on extant amulets are masculine. 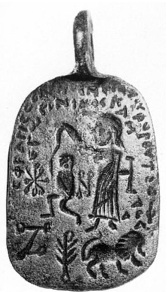 Medieval amulets show a variation on this iconography, with Abyzou trampled underfoot by a horseman. The rider is identified again either as Solomon or Arlaph; one example depicts the rider as Sisinnios, with the demon named as both Abizou and Anabardalea, and an angel named Araph (for Arlaph) standing by with one raised wing. The medieval lead amulets that show the rider subduing the female often have a main image that resembles a gorgoneion and is likely a womb symbol (hystera).

Abyzou is featured in a major text of modern Luciferianism, a belief system that venerates Lucifer. In The Bible of the Adversary by Michael Ford, she is invoked as a “storm demoness” and regarded as a mask of Lilith. Ford explains the gnosis of Abyzou as a way “to understand the essence of the Vampyre, the need for continued ‘conscious’ existence and the search for spiritual immortality.”