Adamastor is a Greek-type mythological fictional beast representing the dangers Portuguese sailors faced when trying to round the Cape of Storms.

The name Adamastor may come from the Greek for "Untamed" or "Untameable" (which would be correctly Adamastos) or the Latin for "imitative rival of Adam" (which would correctly be Adamaster).

Adamastor was invented by the Portuguese poet Luís de Camões in his epic poem Os Lusíadas (first printed in 1572), as a symbol of the forces of nature Portuguese navigators had to overcome during their discoveries. Camões gave his creation a history as one of the Gigantes of Greek mythology who had been spurned by Tethys, now appearing in the form of a threatening stormcloud to Vasco da Gama and threatening ruin to anyone hardy enough to pass the Cape and penetrate the Indian Ocean, which was Adamaster's domain. Adamastor became the Spirit of the Cape, a hideous phantom of unearthly pallor.

The corresponding verses in the 1572 edition.

"Even as I spoke, an immense shape
Materialised in the night air,
Grotesque and enormous stature
With heavy jowls, and an unkempt beard
Scowling from shrunken, hollow eyes
Its complexion earthy and pale,
Its hair grizzled and matted with clay,
Its mouth coal black, teeth yellow with decay. —Camões, The Lusiads Canto V. 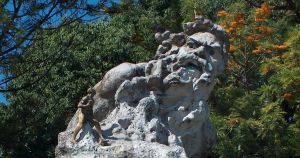 Statue of Adamastor by Júlio Vaz Júnior, inaugurated in 1927 at the Santa Catarina viewpoint, Lisboa, Portugal
Retrieved from "https://www.monstropedia.org/index.php?title=Adamastor&oldid=13636"
Categories: