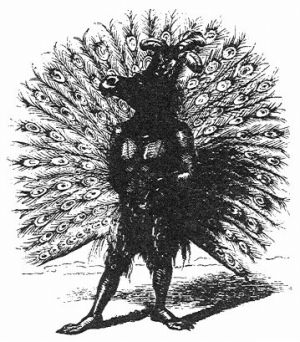 Adramelech (also called Adrammelech, Adramelek or Adar-malik) is a form of sun god in Antiquity and a demon in modern demonology.

Adramelech is generally depicted with a human torso and head, and the rest of the body of a mule (or sometimes as a peacock).

He’s considered the Grand Chancellor of the infernal empire. According to Collin de Plancy's book on demonology, he became the President of Devils' general council (the Senate of the Demons), as well as the eighth of the ten evil Sephiroth. He is also the chancelor of the Order of the Fly, founded by Beelzebub and president of the high council of devils, as well as supervisor of Satan's wardrobe.

The name Adramelech (also Adrammalech) appears in the Old Testament only twice. The first time, he is mentioned as a son of the Assyrian King Sennacharib along with Sharezer, who murdered their father while he was worshiping in the temple of his idol, Nisrach (2 Kings 19:36-38 cf. Isaiah 37:37-39). The second time Adramelech is mentioned is in the context of a Samarian sun god who was worshipped by the Sepharvites. The centre of his worship was the town of Sepharvaim (2 Kings 17:31) and was brought by the Sepharvite colonists into Samaria. The "melech" from his name means "King" in Hebrew. There was also a god called Baal Adramelch his name Baal means "Lord".

In Assyrian mythology the title Baal was a title for many gods and he is described as a son of Sennacherib, king of Assyria (2 Kings 19:37; Isa. 37:38). In later times, he is associated with the Moloch of Carthage. "The Avvites made Nibhaz and Tartak, and the Sepharvites burned their children in the fire as sacrifices to Adrammelech and Anammelech, the gods of Sepharvaim." - 2 Kings 17:31. This often leads to the concept that children were sacrificed to him. The concept of child sacrifice via burning them or placing them within a heated bronze statue of the god comes from Greek accounts and is not historically verifiable as no archaeological proof of such a large, bronze statue exists.

Like other pagan gods, Adramelech is considered a demon in Judeo-Christian tradition. Adramelech has been linked to the angel Asmadai, mentioned in Milton’s Paradise Lost as one of the potent thrones. Milton also referred to Adramelech as an Assyrian idol and as an angel defeated by Uriel and Raphael. In addition, he appears in The History of Magic, pictured as a horse, and has been equated with the Babylonian god Anu, and with the Ammonite Moloch.

A poet's description of Adramelech can be found in Robert Silverberg's short story "Basileus". Adremelech is described as "The enemy of God, greater in ambition, guile and mischief than Satan. A fiend more curst - a deeper hypocrite."

Part of this article consists of modified text from Wikipedia, and the article is therefore licensed under GFDL.
Retrieved from "https://www.monstropedia.org/index.php?title=Adramelech&oldid=12478"
Categories: