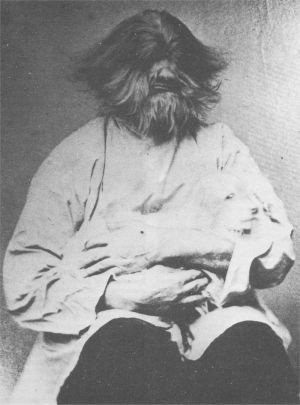 Adrian Jefticheff, also known as The Dog of the Caucasus or The Siberian Dog-Man was an early sideshow performer and person born with a rare condition known as hypertrichosis.

Adrian Jefticheff was born near Tbilisi (Tiflis) in then Russian occupied Georgia. Early in his life, Adrian fled his village and became a forest hermit. He had also a strong penchant for alcohol and had periodically shaved his face and worked as a labourer. He then progessively made his way to the stage until his last tour in 1873. He was accompanied by his equally hairy illegitimate son, Fedor Jeftichew. The ‘Wild Man from the Kostroma Forest’ was billed as being the product of an affair between a bear and a Russian peasant woman. Many visitors to his exhibition were disgusted by his unkempt and debauched appearance. His appearance was in stark contrast to that of his toddler son, Fedor. He believed that he and little Fedor were the victims of a divine punishment, and spent the considerable fortune they earned on prayers to be said after their deaths. He died four years after at the age of 59.