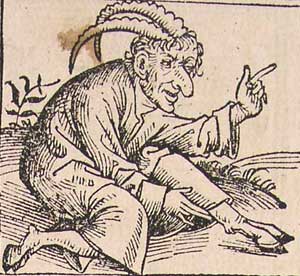 Aegipan from the Nurenburg Chronicle, 1493

Lybian Aegipans are a mythical tribe of Satyr-like creatures believed to inhabit the Atlas Mountains of North-West Africa.

"Rising from the sea at the middle of the coast [of the Atlantic coast of Aithiopia (Africa)] is a mountain of great height which glows with eternal fires--its Greek name is the Chariot of the Gods; and four days' voyage from it is the cape called the Horn of the West, on the confine of Africa, adjacent to the Western Aethiopes [black Africans]. Some authorities also report hills of moderate height in this region, clad with agreeable shady thickets and belonging to Aegipanes and Satyri (Satyrs)." - Pliny the Elder, Natural History 6. 197 (trans. Rackham) (Roman encyclopedia C1st A.D.)

The African satyrs were probably derived from travelers accounts of monkeys, gorillas and other wild animals.