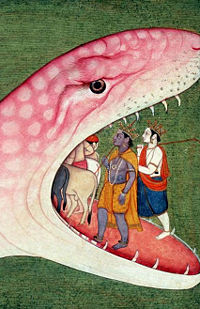 Aghasura (अघासुर), is a demon (asura) in Hindu and Vedic mythology. He was one of the generals of King Kamsa.

The Bhagavata Purana states that he assumed the form of a vast serpent.

Krishna's companions, the cowherd boys, entered its mouth, mistaking it for a mountain cavern. After seeing this, Krishna then came to their rescue, killing Aghasura.