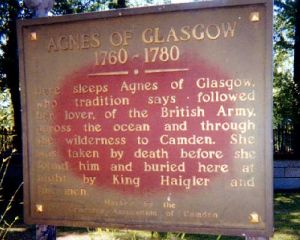 Agnes of Glasgow (1760-1780) is a woman of American folklore, but nonetheless was in fact a real person.

Born in Glasgow, Scotland, Agnes followed her lover, Lt. Angus McPherson, who was a British Army officer, to America during the American Revolution. She stowed away on a ship bound from England to America, arriving in Charleston, South Carolina. Believing his unit was assigned near Camden, in Kershaw County, South Carolina, and having heard that he may have been wounded, she wandered through towns and the wilderness hoping to make contact with him or someone who knew him. However, she became ill and died before she could find him. She was buried under cover of darkness by Wateree American Indian King Haigler, who had befriended her.

Local legend maintains that she searches for her lover still, and that her ghost haunts the "Old Quaker Cemetery" where she was buried, and the surrounding wooded area to present day. The legend is such that it has received media attention in South Carolina, as well as ghost hunters from around the country. Local historians confirm that the British Army did arrive in Camden during that year, but since it is not known as to which month Agnes died, it is not possible to know if they were in Camden at the time of her death.

To summon agnes of Glasgow:

Part of this article consists of modified text from Wikipedia, and the article is therefore licensed under GFDL.
Retrieved from "https://www.monstropedia.org/index.php?title=Agnes_of_Glasgow&oldid=15160"
Categories: