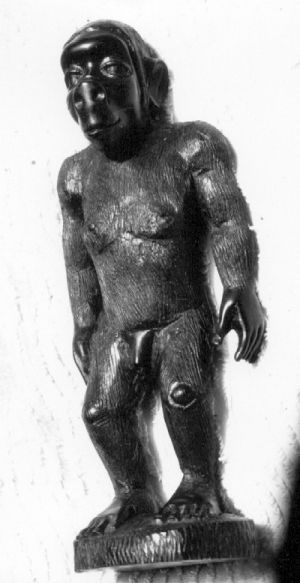 The agogwe is a small human-like biped reported from the forests of East Africa.

These long-haired beings of small size are known by a variety of names throughout Africa, including in the Congo, they are called kakundakári; in central Africa as amajungi or niaka-ambuguza; in East Africa as agogwe, doko, mau, or mberikimo; in southern Africa as chimanimani or tokoleshe; and in West Africa as abonesi, ijiméré, or séhité. In another part of the world, in Sumatra, there have been reports of a diminutive bipedal ape for at least 150 years. This cryptid is called Orang Pendek.

It is 1 to 1.7m tall with long arms, long rust colored woolly hair and is said to have yellowish-red skin under its coat. It has also been reported as having black or grey hair. Its feet are about 12cms long with opposable toes. Differences between it and known apes include a rounded forehead, small canines and its hair and skin color.

One of the most discussed sightings occurred near the turn of the nineteenth century when Capt. William Hichens was sent on an official lion hunt to this region. While there, waiting in a forest clearing for a man-eater, he saw, as he would write, December 1937, in the London magazine Discovery:

"two small, brown, furry creatures come from the dense forest on one side of the glade and disappear into the thickets on the other. They were like little men, about four feet high, walking upright, but clad in russet hair. The native hunter with me gazed in mingled fear and amazement. They were, he said, agogwe, the little furry men whom one does not see once in a lifetime. I made desperate efforts to find them, but without avail in that wellnigh impenetrable forest.

When Hitchens was criticized and ridiculed, Cuthbert Burgoyne wrote a letter to Discovery in 1938, noting that he and his wife had seen something similar while coasting Portuguese East Africa known today as Mozambique in a Japanese cargo boat in 1927. Close enough to shore to see things on the beach using a "glass of twelve magnifications," they spied a troupe of feeding baboons, apparently picking up shellfish or crabs.

"As we watched, two little brown men walked together out of the bush and down amongst the baboons. They were certainly not any known monkey and yet they must have been akin or they would have disturbed the baboons. They were too far away to see in detail, but these small human-like animals were probably between four and five feet tall, quite upright and graceful in figure. At the time I was thrilled as they were quite evidently no beast of which I had heard or read. Later a friend and big game hunter told me he was in Portuguese East Africa [Mozambique] with his wife and three hunters, and saw a mother, father and child, of apparently a similar animal species, walk across the further side of a bush clearing. The natives loudly forbade him to shoot."

Charles Cordier, a professional animal collector who worked for zoos and museums, followed the tracks of the kakundakari in Zaire in the late 1950s and early 1960s. Once, said Cordier, a Kakundakari had become entangled in one of his bird snares. "It fell on its face," said Cordier, "turned over, sat up, took the noose off its feet, and walked away before the nearby African could do anything".Cremo, M. & Thompson, R. (1996). Forbidden Archaeology: The Hidden History of the Human Race. Bhaktivedanta Book Publishing.

Another, albeit unlikely, theory is the possible survival of gibbons in Africa. Gibbons are lesser apes and are small, tail-less, with rounded foreheads and small canines. The biggest problem with this theory is that gibbons rarely walk on solid land and mainly move with their arms. It should be noted, however, that they are certainly capable of walking on the ground, and, when they do so, walk on two legs.

Another possibility is that a chimpanzee has adapted towards open country and has filled an Australopithecine-like niche. African Ape Complex

Part of this article consists of modified text from Wikipedia, and the article is therefore licensed under GFDL.
Retrieved from "https://www.monstropedia.org/index.php?title=Agogwe&oldid=12523"
Category: