The ahool is a flying cryptid, a legendary giant bat, or by other accounts, a pterosaur.

Named for its distinctive call "A-hool".

The ahool is described as having a monkey/ape-like head with large dark eyes, large claws on its forearms approximately the size of an infant, and a body covered in gray fur. Possibly the most intriguing and astounding feature is that it is said to have a wingspan of 3 m 10 ft. This is almost twice as long as the largest known bat in the world, the common flying fox.

The ahool is said to live in the deepest rainforests of Java.

According to Loren Coleman and Jerome Clark, The ahool was first described by Dr. Ernest Bartels while exploring the Salak Mountains on the island of Java. 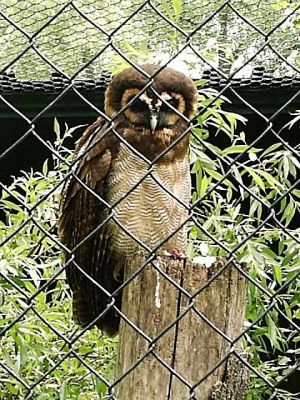 The ahool as a owl

Size nonwithstanding, the Javan or Bartels's Wood-owl seems an especially promising candidate to resolve the ahool enigma: it has a conspicuous flat "face" with large dark eyes exaggerated by black rings of feathers and a beak that protrudes but little, and it appears greyish-brown when seen from below. Its call is characteristic, a single shout, given intermittently, and sounding like HOOOH!. Like most large owls, it is highly territorial in breeding season and will frighten away intruders by mock attacks from above and behind. Its flight, being an owl, is nearly completely silent, so that the victim of such sweeps usually becomes aware of the owl when it is homes in snarling and with outstretched talons (held at "breast" height to the observer), and would just have time to duck away. The Javan Wood-owl is a decidedly rare and elusive bird not often observed even by ornithologists, and hides during day. It is found in remote montane forest at altitudes of probably around 1,000-1,500 meters, and does not tolerate well human encroachment, logging and other disturbances.

Part of this article consists of modified text from Wikipedia, and the article is therefore licensed under GFDL.
Retrieved from "https://www.monstropedia.org/index.php?title=Ahool&oldid=11584"
Categories: