The Ahuizotl is a legendary creature of Aztec mythology. It is half dog, half monkey, with a hand protruding from the end of its tail. 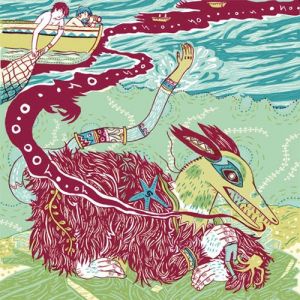 Its name reputedly means "water monster" in Náhuatl. There was an Aztec king called Ahuitzotl who took the Ahuitzotl as his mascot, but it seems that the king derives his name from the mythical beast.

The mythological creature of Aztec mythology is included within Book 11 of the Florentine Codex, which describes it as:

"...very like the teui, the small teui dog; small and smooth, shiny. It has small, pointed ears, just like a small dog. It is black, like rubber; smooth, slippery, very smooth, longtailed. And its tail is provided with a hand at the end; just like a human hand is the point of its tail. And its hands are like a raccoon's hands or like a monkey's hands. It lives, it is a dweller in watery caverns, in watery depths. And if anyone arrives there at its entrance, or there in the water where it is, it then grabs him there. It is said that it sinks him, it plunges him into the water; it carries him to its home, it introduces him to the depths; so its tail goes holding him, so it goes seizing him ... [When the body is retrieved] the one it has drowned no longer has his eyes, his teeth, and his nails; it has taken them all from him. But his body is completely unblemished, his skin uninjured. Only his body comes out all slippery-wet; as if one had pounded it with a stone; as if it had inflicted small bruises ... When it was annoyed - had caught no one, had drowned none of us commoners - then was heard as if a small child wept. And he who heard it thought perhaps a child wept, perhaps a baby, perhaps an abandoned one. Moved by this, he went there to look for it. So there he fell into the hands of the auítzotl [sic], there it drowned him..."

The Ahuizotl is greatly feared due to its liking for human flesh, especially nails, eyes, and teeth. It generally lives in or near the water and uses the hand on the end of its tail to snatch its prey.

Part of this article consists of modified text from Wikipedia, and the article is therefore licensed under GFDL.
Retrieved from "https://www.monstropedia.org/index.php?title=Ahuizotl&oldid=9123"
Categories: