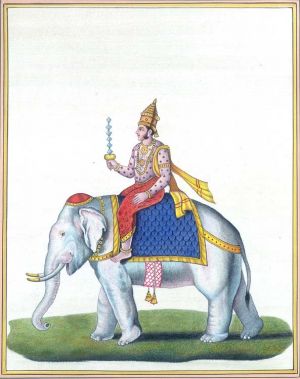 In Hinduism, Airavata (ऐरावत) is a monstrous white elephant who carries Lord Indra.

Airavata is also called Ardha-Matanga, meaning elephant of the clouds; Naga-malla, meaning the fighting elephant; and Arkasodara, meaning brother of the sun. Abharamu is the elephant wife of Airavata.

Airavata has four tusks and seven trunks and is spotless white.

According to the Matangalila, Airavata was born from Iravati when Brahma sang sacred hymns over the halves of the egg shell from which Garuda hatched, followed by seven more male and eight female elephants. Prithu made Airavata king of all elephants. One of his names means "the one who knits or binds the clouds" since myth has it that these elephants are capable of producing clouds.

The eight guardian deities who preside over the eight points of the compass each sits on an elephant. Each of these deities has an elephant that takes part in the defense and protection of its respective quarter. Chief among them is Airavata of Indra.

The connection of elephants with water and rain is emphasized in the mythology of Indra, who rides the elephant Airavata when he defeats Vritra. This mighty elephant reaches down his trunk into the watery underworld, sucks up its water, and then sprays it into the clouds, which Indra then causes to rain forth cool water, thereby linking the waters of the sky with those of the underworld. Airavata also stands at the entrance to Svarga, Indra's palace.

There is a reference to Airavata in the Bhagavad Gita:

"Of horses, know Me to be the nectar-born Ucchaisravas; of lordly elephants, Airavata and of men, the monarch." (Chapter 10, Verse 27)[1]

At Darasuram near Tanjore is a temple where it is believed that Airavata worshipped the Lingam; the Lingam is named after him as Airavateswara. This temple, which abounds in rare sculpture and architectural workmanship, was built by Rajaraja Chola II (1146-73).