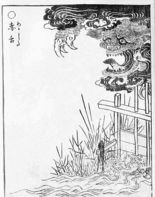 An Akashita (赤舌, lit. "red tongue") is a yokai in Japanese foklore.

The Akashita is a creature with clawed hands, a hairy face and a huge lolling tongue, with most of its body hidden in a black cloud over a floodgate.