The Alicanto is a mythological bird in Chilean mythology.

The legend says that the Alicanto's wings shine during the night with beautiful, metallic colors, and their eyes emit strange lights; making a luminous flight, some would not project shade on the desert. It is often depicted as fairly large, though its size and shape vary depending on the telling. Some show it as just in the same range as an eagle, a hawk or a falcon; however, others show it as being enormous.

There were two types of Alicanto, one which fed on silver and the other which fed on gold. Both types glowed a silver or gold color whenever they found and fed off of a vein of metal.

The Alicanto nested between hills that contain precious stones, feeding on gold and silver. It guarded areas known for precious metals, and miners would follow the bird to its nest and find gold there. However, the Alicanto had a spiteful side. If it caught miners spying on it, it would lead them off a cliff to fall to their deaths.

Sighting an Alicanto brings luck to any miner who sees it. Alicanto live in small caves between hills containing minerals, and feed on gold and silver.

If the lucky miner follows an alicanto without being caught, they can find silver or gold. But, if the Alicanto discovers them, the bird will guide the greedy miner off a cliff, causing them to fall to their death. In some other interpretations, the Alicanto will help human miners that it favors on the condition that they share.

Small modern depiction of the Alicanto 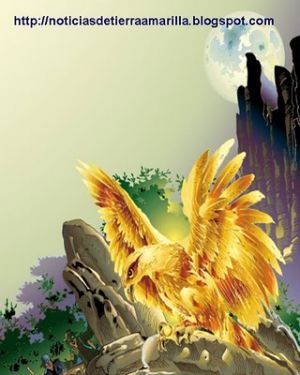 Middle-Sized depiction of the Alicanto 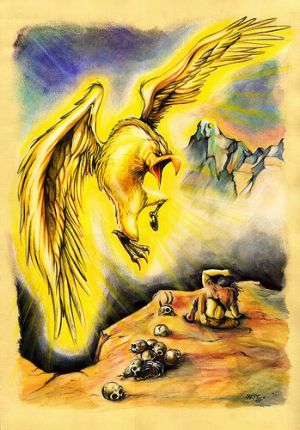 Large depiction of the Alicanto