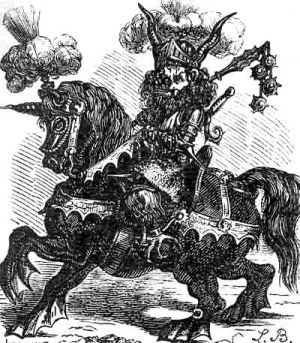 In demonology Allocer is a Great Duke of Hell.

Alocer appears in the shape of a knight or warrior mounted on a enormous horse, with leonine face, flaming eyes and ruddy complexion. He speaks with a loud, hoarse voice and much gravity.

According to the meticulous German demonologist Johann Wierius, Alocer is a very powerful demon, Grand Duke of Hades, ruler of thirty-six infernal legions, and is one of the 72 spirits of Solomon.

Allocer is said to teach astronomy and liberal arts but also to induce people to immorality. He is also said to provide very good familiars.

Allocer is a strong duke and a great, he commeth foorth like a soldier, riding on a great horsse, he hath a lions face, verie red, and with flaming eies, he speaketh with a big voice, he maketh a man woonderfull in astronomie, and in all the liberall sciences, he bringeth good familiars, and ruleth thirtie six legions. Pseudomonarchia daemonum - Johann Wier (1583)

The Fifty-second Spirit is Alloces, or Alocas. He is a Duke, Great, Mighty, and Strong, appearing in the Form of a Soldier riding upon a Great Horse. His Face is like that of a Lion, very Red, and having Flaming Eyes. His Speech is hoarse and very big. His Office is to teach the Art of Astronomy, and all the Liberal Sciences. He bringeth unto thee Good Familiars; also he ruleth over 36 Legions of Spirits. His Seal is this, which, etc. Goetia - S. L. MacGregor Mathers (1904)