In Greek mythology, Amalthea (in Greek, "tender goddess") is the most often mentioned among foster-mothers of Zeus. 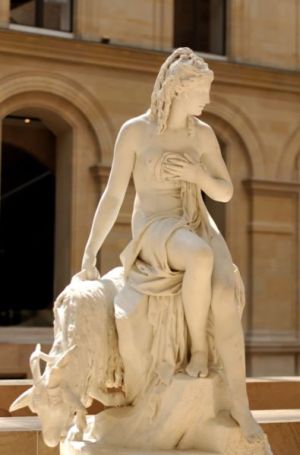 She is sometimes represented as the goat who suckled the infant-god in a cave in Mount Aigaion ("Goat Mountain") in Crete, sometimes as a goat-tending nymph of uncertain parentage (daughter of Oceanus, Haemonius, Olen, or Melisseus), who brought him up on the milk of her goat.

Derived from the goddess of plenty in earlier traditions that were superseded by the Greek, her bountiful goat horn is depicted near the goat that symbolizes her in the zodiac. She maybe the same Goddess as Adamanthea. In one tradition, Cronus swallowed all of his children immediately after birth. the mother goddess Rhea, Zeus' mother and Cronus' sister and wife, deceived Cronus by giving him a stone wrapped to look like a baby instead of Zeus, whom she instead gave to Adamanthea to nurse in a cave on a mountain in Crete. The Greek tradition relates, in order that Cronus should not hear the wailing of the infant, Amalthea gathered about the cave the Kuretes or the Korybantes to dance, shout, and clash their spears against their shields (Kerenyi 1951, p 94).

It is the early fourth-century AD Christian writer Lactantius (in Divine Institutions i.22), who asserts that the child was fed by Amalthea and Melissa ("honey"), whom Lactantius takes to be the daughters of King Minos. There are earlier stories of the child Zeus being nourished by sacred bees.

The goat Amalthea's horn, according to the Alexandrian poet Callimachus (Hymn to Zeus) was the original of the drinking vessel called a rhyton, an inverted horn-shape in its most basic form, with an outlet hole in the pointed base—the very horn from which the child Zeus drank.

Alternatively, the sacred goat having broken off one of her horns, Amalthea filled it with flowers and fruits and presented it to Zeus, who placed it together with the goat amongst the stars, although the one-horned goat was not identified with the Unicorn by the Greeks.

According to another story, Zeus himself broke off her horn and, in an example of mythic inversion, gave it to Amalthea, promising that it would supply whatever she desired in abundance. The goat-nymph, however, was older than the Olympian. Amalthea was a goddess who traditionally provided plenty as part of her nature before the cult of Zeus existed. Amalthea, in this tradition, gave her horn to the river-god Achelous (her reputed brother), who exchanged it for his own horn, which had been broken off in his contest with Heracles for the possession of Deianeira.

According to ancient mythology, the owners of her horn were many and various as one tradition was integrated into another. Speaking generally, Amalthea's horn was regarded as the symbol of inexhaustible riches, the horn of plenty or Cornucopia, and became adopted as the attribute of various divinities— of Gaia, Demeter, Cybele, of Hades in his manifestation as Plouton, the bringer of wealth, and of rivers as fertilizers of the land.

The term horn of Amalthea is applied to any especially fertile district. An estate belonging to Titus Pomponius Atticus was called Amaltheum. Cretan coins represent the infant Zeus being suckled by the goat Amalthea; other Greek coins exhibit him suspended from her teats or carried in the arms of the nymph (Ovid, Fasti, v. 115; Metam. ix. 87).

Amalthea's skin, or that of her goat, killed and skinned by the grown Zeus, became the protective aegis in some traditions, a vivid enough metaphor for the transfer of power to this Olympian god from that of the goddess who preceded his cult.