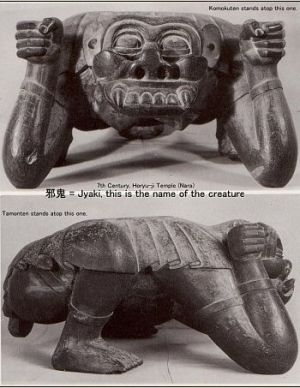 The Amano Jyaku is commonly held to be derived from Amanosagume (天探女), a wicked deity in Shinto myth, which shares the amanojaku's contrary nature and ability to see into a person's heart. The creature has also entered Buddhist thought where it is called a jaki and is considered as an opponent of Buddhist teachings. It is commonly depicted as being trampled on and subdued into righteousness by Bishamonten or one of the other Shitenno.

Amanojaku is usually depicted as a kind of small oni. In sculpture, they are found in temple as tiny creatures the four kings stand upon.

Amanojaku is thought to be able to provoke a person's darkest desires and thus instigate him into perpetrating wicked deeds.

One of the amanojaku's best known appearances is in the fairytale Urikohime, in which a girl miraculously born from a melon is doted upon by an elderly couple. They shelter her from the outside world, and she naively lets the amanojaku inside one day, where it kidnaps or devours her, and sometimes impersonates her by wearing her flayed skin.

In a tradition unique to Japan, the Jyaki demons are sometimes represented as the Tentouki (Tentoki) and Ryuutoki (Ryutoki) creatures, apparently in reference to a Japanese legend that says these creatures were originally evil, but after getting trampled by the Shitenno, they repented, were saved, and now carry lanterns as offerings of light to the Buddha.

Part of this article consists of modified text from Wikipedia, and the article is therefore licensed under GFDL.
Retrieved from "https://www.monstropedia.org/index.php?title=Amanojaku&oldid=10886"
Categories: