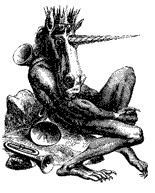 Amduscias has thirty legions of demons under his command (twenty-nine according to other authors) and has the rank of Great Duke of Hell.

Amdusias is associated with thunder and it has been said that his voice is heard during storms. In other sources, he is accompanied by the sound of trumpets when he comes and will give concerts if commanded , but while all types of musical instruments can be heard they can't be seen. He can make trees bend at will.

Amduscias a great and a strong duke, he commeth foorth as an unicorne, when he standeth before his maister in humane shape, being commanded, he easilie bringeth to passe, that trumpets and all musicall instruments may be heard and not seene, and also that trees shall bend and incline, according to the conjurors will, he is excellent among familiars, and hath nine and twentie legions. Pseudomonarchia daemonum - Johann Wier (1583)

The Sixty-seventh Spirit is Amdusias, or Amdukias. He is a Duke Great and Strong, appearing at first like a Unicorn, but at the request of the Exorcist he standeth before him in Human Shape, causing Trumpets, and all manner of Musical Instruments to be heard, but not soon or immediately. Also he can cause Trees to bend and incline according to the Exorcist's Will. He giveth Excellent Familiars. He governeth 29 Legions of Spirits. And his Seal is this, etc. Goetia - S. L. MacGregor Mathers (1904