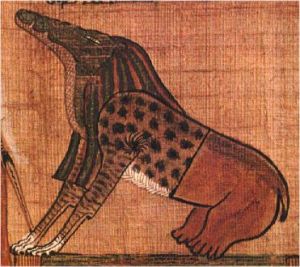 Ammut is depicted with the head of a crocodile or dog, the front part of her body like a lion or leopard, and her back part in the form of a hippopotamus, a combination of those animals which were considered as the most dangerous to the ancient Egyptians.