In Armenian mythology, Anahit (Armenian: Անահիտ) was the goddess of fertility, healing, wisdom and water. 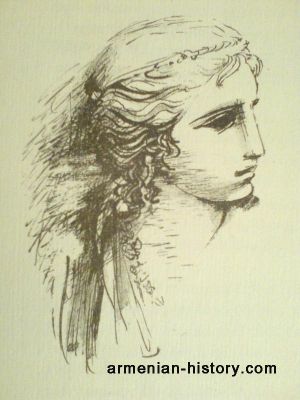 During the early periods of Armenia, Anahit was hailed as the goddess of war. By the 3rd century, she became the main deity in Armenia together with Mithras.

Berossus, a historian, related Anahit with Aphrodite whereas medieval Armenian scribes identify her with Artemis. According to Strabo, the Anahit’s worship was devoted to prostitution while king Trda commends Lady Anahit as the “glory” of the nation. The Anahit-worship was recognized in Erez, Armavir, Artashat and Ashtishat. In addition, a mountain in Sophene district was called Anahit’s throne and the Erez district in the province of Akilisene was known as Anahtakan Gavar.

Erez Temple was rich and the noblest of Armenia, according to Plutarch. During the expedition of Marc Antony in Armenia, Anahit’s statue was torn to pieces by Roman soldiers. Then, the Armenians built a new golden statue of Anahit at Erez that was worshiped before the time of St. Gregory the Illuminator. The annual festival of the month Navasard was held in honor of Anahit. The head of the bronze gilded statue of Anahit is the symbol of ancient Armenian medicine.