In demonology, Andras is a Great Marquis (a Prince to other authors) of Hell. 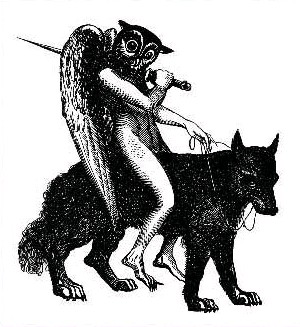 Andras has under his command thirty legions of demons whose only directive is to hunt and kill men. He is seconded by his henchman Flauros. He is the 63rd of the 72 spirits of Solomon.

Andras appears with a winged angel’s body and the head of an owl or raven, riding upon a strong black wolf and wielding a sharp and bright sword.

Andras was responsible for sowing discord and for this reason was allegedly summoned quite often by military leaders, to use his abilities to incite wars that last for decades, redefining peoples and continents. In addition, due to the subtle nature of his work, Andras was supposedly extremely difficult to detect. Moreover Andras was considered to be a highly dangerous demon, who could kill the conjuring magician and his assistants if precautions were not taken. A misstep outside the magical protective circle could mean instant death for the conjuretors.

Andras is a great marquesse, and is seene in an angels shape with a head like a blacke night raven, riding upon a blacke and a verie strong woolfe, flourishing with a sharpe sword in his hand, he can kill the maister, the servant, and all assistants, he is author of discords, and ruleth thirtie legions. Pseudomonarchia daemonum - Johann Wier (1583)

The Sixty-third Spirit is Andras. He is a Great Marquis, appearing in the Form of an Angel with a Head like a Black Night Raven, riding upon a strong Black Wolf, and having a Sharp and Bright Sword flourished aloft in his hand. His Office is to sow Discords. If the Exorcist have not a care, he will slay both him and his fellows. He governeth 30 Legions of Spirits, and this is his Seal, etc. Goetia - S. L. MacGregor Mathers (1904)