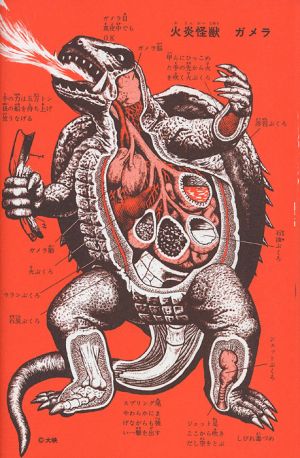 Anguirus (アンギラス, 'Angirasu') is a kaiju that looks like a mutated ankylosaurus, who first appeared in the 1955 Toho film Godzilla Raids Again.

The original English name given to the monster by Toho was Angilas, which was changed to Angurus in Gigantis, the Fire Monster, the 1959 American version of the film. In the mid-1990s, Toho copyrighted the revised name Anguirus, thus making it official. Other names include: Angilas, Anguirusaurus, Angilasaur, Anguirusaurus, Killer of the Living, and Angzilla.

Anguirus is a four-legged giant dinosaur that looks vaguely similar to an Ankylosaurus. He has several horns at the top of his head and a single horn above his nose. His face is long and drawn out and has rows of jagged, serrated teeth. His carapace is studded with long, sharp spikes. Anguirus' tail is covered with spikes and makes up most of his body length. His hind limbs are longer than his forelimbs and he can stand up on them to his full height, though he generally stands and walks upon all fours.

Anguirus has no special abilities but he is armed with an ultra-hard spiked carapace, which can parry any physical attack and inflict heavy edged damage in response. Although an aggressively tenacious fighter, Anguirus lacks ranged capability and superpowers compared to some of Godzilla's other opponents. In his first appearance in Godzilla Raids Again, it is explained that Anguirus' is capable of moving incredibly fast in spite of his bulk due to his brain extending into his chest and abdominal areas, allowing him to react more quickly. He has been known to hurl himself backwards at a foe, ramming them with his spiny carapace (Godzilla vs. Gigan). He is also capable of burrowing substantial distances (Godzilla vs. Mechagodzilla). Recently, the Anguirus that appeared in Godzilla: Final Wars has shown the ability to curl himself into a ball and propel himself at tremendous speed. Last but not least, Anguirus can stun nearby opponents with his fearsome Sonic Roar. In a 1955 Japanese manga adaptation of Godzilla Raids Again (contemporary with the film), Anguirus was depicted several times as breathing some sort of flame.

Despite repeatedly facing more powerful opponents than himself, most notably Godzilla, King Ghidorah, and Mechagodzilla, Anguirus has never retreated from a fight without first taking substantial punishment. Perhaps the finest example of Anguirus' persistence was his performance against King Ghidorah in Destroy All Monsters, in which he attached himself to one of King Ghidorah's necks with his jaws, staying on as King Ghidorah was flying away, until King Ghidorah bit Anguirus' own neck, causing him to fall. The same scene occured as stock footage in Godzilla vs Gigan. 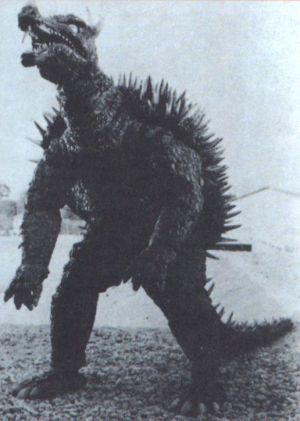 Anguirus was the first enemy that Godzilla ever faced, in 1955 Godzilla Raids Again. Apparently, Anguirus' species was extremely aggressive toward other creatures, thus explaining his attacks on Godzilla. Godzilla and Anguirus battled in Osaka, and after a fierce struggle Godzilla won with a bite to the neck. He then appeared to incinerate his opponent's body with his atomic breath.

Anguirus was re-introduced (in a brand-new costume) in the 1968 film Destroy All Monsters as an ally of Godzilla, living with him on Monsterland. This costume was re-used throughout the remainder of the Showa series, and Anguirus continued in his capacity as Godzilla's ally. He helped Godzilla repel the space monsters, Gigan and King Ghidorah, in 1972 (Godzilla vs. Gigan). He and Godzilla returned to Monster Island, but the island was disturbed by nuclear bomb tests (Godzilla vs. Megalon). The ground beneath Anguirus cracked and he fell into a pit.

Anguirus next appeared at the beginning of Godzilla vs. Mechagodzilla, in a snowy region, where he witnessed Mechagodzilla's first emergence. He followed Mechagodzilla underground to Japan and engaged him there. However, Mechagodzilla was too powerful for Anguirus, and severely injured him, breaking his jaw in a bloody display. Anguirus was forced to retreat, possibly to summon the real Godzilla.

In 1999, (Destroy All Monsters takes place in this year, though it was made in 1968) Anguirus and the other inhabitants of Monsterland were captured and mind-controlled by an alien race known as Kilaaks who desired to dominate Earth. Anguirus guarded the Kilaak base until the humans severed the mind control. Anguirus was then sent to fight King Ghidorah at Fuji, where he and the other monsters successfully destroyed the space dragon once and for all. While fighting King Ghidorah, Anguirus fell and inadvertently revealed the Kilaaks' underground base, allowing Godzilla to destroy it. Anguirus and the other monsters returned to their home where they lived in peace to this day.

After a 30 year absence, Anguirus made a return in the 2004 film, Godzilla: Final Wars as a controlled monster of the Xiliens. He appears in Shanghai, and tramples everything in his path, then engaged the flying UN battleship, Karyu. Then the Xiliens appeared and teleported Anguirus and the other monsters away. They told the humans that they eliminated the monsters to save Earth, but this was soon discovered to be a ruse, and that the Xiliens were controlling the monsters. In Shanghai, the Xiliens use their fighter ships to attack the Karyu. While the Karyu was distracted, Anguirus jumped and curled himself into a ball, crashing into the ship at its midpoint. Karyu went spinning in the air before colliding into the Oriental Pearl Tower.

Anguirus is very popular with Godzilla fans. In a G-Fan magazine poll for favorite monster, Anguirus won 3rd place behind only Godzilla and Gamera. Part of the reason is that the monster is a very loyal ally of Godzilla in Destroy All Monsters and Godzilla vs. Gigan.