Ankou is a personification of death mainly in Breton mythology. 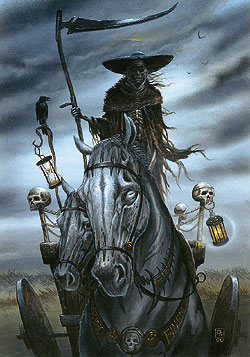 It is said that he is the one who collects the souls of the dead and aids them on their journey to the next world, in his old rickety cart. The cart is pulled along either by two horses, one of which is old and thin while the other is youthful and strong, or by four black horses of unspecified age.

According to legend Ankou is tall, and wears a wide-brimmed hat and long coat. Some tales have it that he has two companions, who are skeletons in some versions, following behind his cart and tossing into it souls.

There are many tales involving Ankou. According to some he was the first child of Adam and Eve.

One says that there were three drunk friends walking home one night, when they came across an old man on a rickety cart. Two of the men started shouting at Ankou, and then throwing stones, when they broke the axle on his cart they ran off.

The third friend felt bad, and so wanting to help Ankou, first found a branch to replace the broken axle, and then gave Ankou his shoe-laces to tie it to the cart with. The next morning, the two friends who were throwing stones at Ankou were dead, while the one who stayed to help only had his hair turned white. He would never speak in detail about how it happened.

Part of this article consists of modified text from Wikipedia, and the article is therefore licensed under GFDL.
Retrieved from "https://www.monstropedia.org/index.php?title=Ankou&oldid=15013"
Categories: