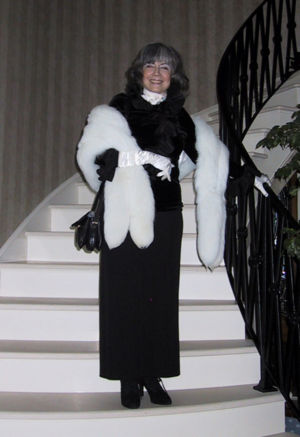 Anne Rice (born October 4th 1941) is a best-selling American author of horror/fantasy books. She was born Howard Allen O'Brien. Best known for her Vampire Chronicles, Rice has published a number of works with sado-masochistic themes. She was married to poet Stan Rice for 41 years until his death in 2002.

Rice was born and spent most of her early life in New Orleans, Louisiana, which forms the background against which most of her stories take place. She was the second daughter in a Catholic Irish-American family; Rice's sister, Alice Borchardt, also became a noted genre author.

About her unusual given name, Rice said: "My birth name is Howard Allen because apparently my mother thought it was a good idea to name me Howard. My father's name was Howard, she wanted to name me after Howard, and she thought it was a very interesting thing to do. She was a bit of a Bohemian, a bit of mad woman, a bit of a genius, and a great deal of a great teacher. And she had the idea that naming a woman Howard was going to give that woman an unusual advantage in the world."

Rice became "Anne" on her first day of school, when a nun asked her what her name was. She blurted out "Anne" immediately, and her mother, who was with her, let it go without correcting her, knowing how self-conscious her daughter was of her real name.

Her father moved the family to north Texas, taking up residence in Richardson, in 1958, when Rice was 16, and she met Stan Rice, whom she would later marry, at Richardson High School. She began college at Texas Women's University in Denton] but relocated with Stan to California, where the couple put down roots in San Francisco. "I'm a totally conservative person," she later told the New York Times (November 7, 1988). "In the middle of Haight-Ashbury in the 1960s, I was typing away while everybody was dropping acid and smoking grass. I was known as my own square." She would not return to New Orleans until 1989.[1]

Rice and her husband had a daughter Michele, who was born on September 21, 1966 and died of leukemia on August 5, 1972. Rice has said that Claudia, the child in her vampire fiction, was inspired by her late daughter. Their son Christopher Rice, now a novelist, was born March 11, 1978.

She completed her first book, Interview with the vampire, in 1973 and published it in 1976. This book would be the first in Rice's popular Vampire Chronicles series, which includes 1985's The Vampire Lestat and 1988's The Queen of the Damned. Rice has also published adult-oriented fiction under the pen name Anne Rampling, and has written explicit sado-masochistic erotica as A.N. Roquelaure.

Her fiction is often described as lush and descriptive, and her characters' sexuality is fluid, often displaying homoerotic feelings towards each other. She also weaves philosophical and historic themes into the dense pattern of her books. To her admirers, Rice's books are among the best in modern popular fiction, possessing those elements that create a lasting presence in the literary canon. To her critics, her novels are baroque, "low-brow pulp" and redundant. A critical analysis of Rice's work can be found in S. T. Joshi]'s book The Modern Weird Tale (2001).

In 1998, after spending most of her adult life as a self-described atheist, Rice returned to her Catholic faith, which she had not practiced since she was 18. In October of 2005, as she reaffirmed her Catholic faith, Rice announced in a Newsweek article that she would "write only for the Lord." She called Christ the Lord: Out of Egypt, her first novel in this genre, the beginning of a trilogy that will chronicle the life of Jesus. In an interview with Christianity Today, headlined "Interview with a Penitent", Rice declared that will never again write another vampire novel, saying; "I would never go back, not even if they say, 'You will be financially ruined; you've got to write another vampire book.' I would say no. I have no choice. I would be a fool for all eternity to turn my back on God like that."

Many of her fans reacted with shock to the news of her religious and literary conversion, admonishing her in magazine articles, internet blogs and reader reviews found on the web. Rice responded in a post on Amazon.com that stated: "And yes, the Chronicles are no more! Thank God!"

Whether Rice would continue to be a supporter of liberal causes like gay rights (her son Christopher is openly gay) and a critic of George W. Bush was much debated; she has said that Christianity's stance on homosexuality was something she wrestled with as she considered converting. She remains a passionate supporter of the rights of Jewish and Christian gays and their right to participate in religious worship. Her pattern of political contributions since 1998 suggests that she continues to identify with the Democratic Party [2].

Rice discovered she had Type 1 diabetes when she went into a diabetic coma in December 1998. She is an advocate for people to get tested for diabetes.

In 2002, Stan Rice died after a long illness. In her subsequent depression, Rice's weight rose to 254 pounds. In response to sleep apnea and other weight-related problems, Rice had gastric bypass surgery in 2003.

On January 30, 2004, having already put the largest of her three homes up for sale, Rice announced her plans to leave New Orleans. She cited living alone since the death of her husband and her son's moving out of state as the reasons. "Simplifying my life, not owning so much, that's the chief goal", said Rice. "I'll no longer be a citizen of New Orleans in the true sense." Rice may also have wished for more privacy from the constant attentions of her fans, who were known to camp out in front of her house; up to 200 or more would gather to see her leave for church on Sundays.

In spring 2005 Anne Rice moved to La Jolla, California, to be nearer her son, Christopher. She moved less than a year later to Rancho Mirage for a warmer climate and a "simpler life."

On September 6th, 2004, Rice posted a reply to a number of negative reviews that had appeared on Amazon.com regarding Blood Canticle. She titled her reply, "From the Author to the Some of the Negative Voices Here." This post generated a great deal of publicity online - partly because authors rarely post or respond to reviews on Amazon, and partly because of the tone and nature of her text. Many previous reviews had criticized the quality of writing in Blood Canticle as lazy or shoddy; so when Rice replied by writing an article (of 1,200 words) wherein she proudly dismisses the utility of editors, the incident became fodder for weblogs and Internet sites.

In 1994, Neil Jordan directed a relatively faithful motion picture adaptation of Interview with the vampire, from Rice's own screenplay.

A second film adaptation of the Vampire Chronicles came out in 2002, combining incidents from the second and third books in the series but released under the title of the third book, The Queen of the Damned. The plot was substantially altered from that of the book, and the film was poorly received by fans and critics alike.

A 1994 film titled Exit to Eden, based loosely on the book Rice published as Anne Rampling, starred Rosie O'Donnell and Dan Aykroyd. The work transformed from a love story into a police comedy, possibly due to the explicit S&M themes of the book.

On April 25th, 2006, the musical Lestat, based on Rice's Vampire Chronicles books, opened at the Palace Theatre on Broadway after having its world premiere in San Francisco, California in December 2005. With music by Elton John and lyrics by Bernie Taupin, it was the inaugural production of the newly established Warner Brothers Theatre Ventures.

Despite Rice's own overwhelming approval and praise, the show received mostly poor reviews by critics and disappointing attendance. Lestat closed a month later on May 28, 2006, after just 33 previews and 39 regular performances.

Rice has an adamant stance against fan fiction based on her work, releasing a statement on April 7th, 2000 that prohibited all such efforts. This caused the removal of thousands of fanfics from the popular FanFiction.Net website.

She was mentioned in one of the songs of metalcore band Atreyu in the song The Crimson in the sentence "And Robert Smith lied, boys do cry and with blood tears in my eyes I'm an Anne Rice novel come to live"

New Tales of the Vampires: (Other vampire tales that are not within the main sequence, but in the same fictional world)

Lives of The Mayfair Witches: (It is adviced to read these novels before reading "Blackwood Farm" as the two series merge at this point.)

'Works under the pseudonym Anne Rampling:

Erotica under the pseudonym A. N. Roquelaure:

Part of this article consists of modified text from Wikipedia, and the article is therefore licensed under GFDL.
Retrieved from "https://www.monstropedia.org/index.php?title=Anne_Rice&oldid=8204"
Categories: