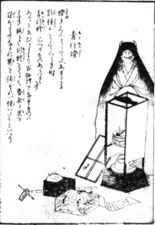 In the Edo period, it was meant to represent the spirit that appeared during Hyaku monogatari Kaidankai meetings (a hundred stories), where people would tell frightening supernatural tales, and after each one was finished, a candle would be put out. When the last story was told and the room went dark, the demon called aoandon was said to appear.

The candles in the room during these meetings were often placed in blue-paper andon lamps in order to create an eerie atmosphere, hence this creature's name.