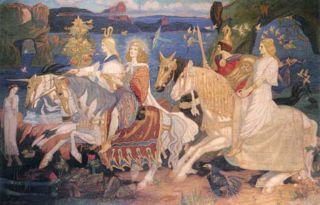 In Irish mythology the aos sí (older form, aes sídhe) are a powerful, supernatural race comparable to the fairies or elves of other traditions. They are variously believed to live underground in the fairy mounds, across the western sea, or in an invisible world that coexists with the world of humans.

From gaelic aos sí means "the people of the mounds". Also referred to in Irish as the daoine sídhe, and in Scottish Gaelic as the daoine sìth or daoine sìdh. They are variously believed to be the ancestors, the spirits of nature, or the goddesses and gods themselves.

According to rare witness, the sídhe are extremely beautiful and while seem mature, look very young in the face.

The fact that many of these sídhe have been found to be ancient burial mounds has contributed to the theory that the aos sí are the distant ancestors of the Gaelic peoples.

In folk belief and practice, the aos sí are often propitiated with offerings, and care is taken to avoid angering or insulting them. Often they are not named directly, but rather spoken of with euphemisms such as "The Good Neighbors," "The Gentry," "The Fair Folk," or simply "The Folk", in the hope that if humans describe them as kind, they are more likely to be so. In this vein, the most common names for them, aos sí, aes sídhe, daoine sídhe (singular duine sídhe) and daoine sìth mean, literally, "People of Peace".

Aos sí are sometimes seen as fierce guardians of their abodes - whether that be a fairy hill, a fairy ring, a special tree (often a hawthorn), or perhaps a particular loch or wood. The Gaelic Otherworld is seen as being closer at the times of dusk and dawn, therefore this is seen as a time special to the aos sí, as are some of the festivals such as Samhain and Midsummer. The aos sí are generally described as stunningly beautiful, though they can also be terrible and hideous.

The Banshee or bean sídhe, which simply means "woman of the sídhe", has come to specifically indicate the supernatural women of Ireland who announce an oncoming death by their wailing and keening. Her counterpart in Scottish mythology is the bean shìth (sometimes spelled bean-shìdh). Other varieties of aos sí and daoine sìth include the Scottish bean nighe - the washerwoman who is seen washing the bloody clothing or armour of the person who is doomed to die; the leanan sídhe - the "fairy lover"; the Cat Sìth - a fairy cat; and the Cu Sìth - fairy dog. The sluagh sídhe - "the fairy host" are sometimes depicted in Irish and Scottish lore as airborne spirits of an unpleasant nature, and perhaps the cursed, evil or restless dead.

Part of this article consists of modified text from Wikipedia, and the article is therefore licensed under GFDL.
Retrieved from "https://www.monstropedia.org/index.php?title=Sidhe&oldid=12393"
Categories: