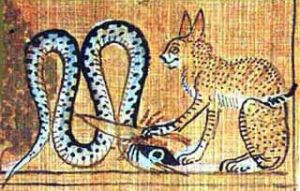 Re Slaying the Serpent Apep

Apep (also spelled Apepi, and Aapep, or Apophis in Greek) was an evil demon, the deification of darkness and chaos (isfet in Egyptian), and thus opponent of light and Ma'at (order/truth), whose existence was believed from the Middle Kingdom onwards.

As the personification of all that was evil, Apep was seen as a giant snake, crocodile, serpent, or in later years, in a few cases, as a dragon, leading to titles such as Serpent from the Nile, and Evil lizard. Some elaborations even said that he stretched 16 yards in length and had a head made of flint.

Neither Shu, Maahes nor Serqet were strong enough to kill Apep. Only a few could kill him - Set boasts that "Every day I slay the enemy of Ra when I stand at the helm of the Barque of Millions of Years, which no other god dare do." He was the only deity who was strong enough to withstand the power of Apep, and to kill the water serpent. The Great Cat of Iunu, Apep and the Sons of Horus

(Set resumes): "Back, Fiend, from the onslaught of his light! If you speak, your face will be overturned by the gods. Your heart will be seized by the lynx (Mafdet), your reins will be bound by the scorpion (Hededet), you will be punished by Ma'at, she will bring you to grief."

(Apep cries out that he will conform to the divine will): "I will perform your will, O Ra, I will act properly, I will act peacefully, O Ra!"

(Set speaks again): "Bring your ropes, O Ra, that Apep may fall to your snaring or be trapped by the gods of north, south, east and west in their traps ... All is now well, O Ra! Proceed in peace! And you, Apep, Down! Away, Apep, O Enemy of Ra!"

(During the fight with Horus, Set loses his testicles ... Apep now taunts Set with this): "But what you felt is worse than the sting of the scorpion. What ma'at did to you was so dire that you will suffer from its effect forever! You will never go courting, you will never make love!" Set, Defending the Solar Barque Against Apep

(Stung by this retort, Set determines to destroy Apep rather than just keep him in bondage ...) "Apep, O Enemy of Ra! Turn your face away! Ra hates the very sight of you." The head is then cut off, hacked in pieces and thrown away on either side of the roads ... "Your head is crushed, O Groundling! Your bones are broken up and your flesh cut in pieces. Ra has consigned you to the earth, O Apep! Enemy of Ra!"

It is to be noted that already on a Naqada I (ca. 4000 BC) C-ware dish (now in Cairo) a snake was painted combined with other desert and aquatic animals as a possible enemy of a solar god who is invisibly hunting in a big rowing vessel (C.Wolterman, in: Jaarbericht van Ex Oriente Lux, Leiden (Holland) Nr. 37 (2002)). Also, comparable hostile snakes as enemies of the sun god existed under other names (in the Pyramid Texts and Coffin Texts) already before the name Apep occurred. The etymology of his name ('pp) is perhaps to be sought in some west-semitic language where a word root "pp meaning 'to slither' existed. A verb root 'pp does at any rate not exist elsewhere in Ancient Egyptian. Apep's name much later came to be falsely connected etymologically in Egyptian with a different root meaning (he who was) spat out; the Romans referred to Apep by this translation of his name.

Apparently because of the spat out interpretation of the name Apep, it was said that he had been formed by Neith, who had been the deification of the primordial waters in the Ennead, from a length of spit she had spat at Nu, the deification of the primordial waters in the Ogdoad. Some subsequent commentators speculated that Apep must have been an earlier creator, and chief god, thus explaining why he had so much enmity towards Ra, but evidence for such a conclusion is slight.

Apep being subdued by Deities

After the end of the Middle Kingdom, the foreign Hyksos, now rulers over Egypt, chose Set, as their favorite deity, since he had been protector of Ra, and was associated with Lower Egypt, where their power base was. Consequently, because the foreign overlords were hated by nationalistic groups, Set became gradually demonised, and started being thought of as an evil god. Indeed, because of the extreme level of nationalism and xenophobia, Set eventually became thought of as the god of evil, and gradually took on all the characteristics of Apep. Consequently, Apep's identity was eventually entirely subsumed by that of Set.

Tales of Apep's battles against Ra were elaborated during the New Kingdom. Since nearly everyone can see that the sun is not attacked by a giant snake during the day, every day,story tellers said that Apep must lie just below the horizon. This appropriately made him a part of the underworld, which attacked the sun each night. In some stories Apep waited for Ra in a western mountain called Bakhu, where the sun set, and in others Apep lurked just before dawn, in the Tenth region of the Night. The wide range of Apep's possible location gaining it the title World Encircler. It was thought that his terrifying roar would cause the underworld to rumble. Myths sometimes say that Apep was trapped there, because he had been the previous chief god and suffered a coup d'etat by Ra, or because he was evil and had been imprisoned.

In his battles, Apep was thought to use a magical gaze to hypnotise Ra and his entourage, attempting to devour them whilst choking the river on which they travelled through the underworld with his coils. Sometimes Apep had assistance from other demons, named Sek and Mot. Ra was assisted by a number of defenders who travelled with him, the most powerful being Set, who sat at the helm. Other gods who feature in later tales as the defenders include fierce warriors such as Mehen, Serket, Maahes, and Bast, together with Shu.

In a bid to explain natural phenomena it was said that occasionally Apep got the upper hand. The damage to order caused thunderstorms and earthquakes. Indeed: it was even thought that sometimes Apep actually managed to swallow Ra during the day, causing a solar eclipse, but since Ra's defenders quickly cut him free of Apep, the eclipse always ended within a few minutes. On the occasions when Apep was said to have been killed, he was able to return each night (since he lived in the world of the dead already). In Atenism it is Aten who kills the monster, obviously, since Aten is the only god in the belief system.

Apep was not so much worshipped, as worshipped against. His defeat each night, in favour of Ra, was thought to be ensured by the prayers of the Egyptian priests and worshipers at temples. The Egyptians practiced a number of rituals and superstitions that were thought to ward off Apep, and aid Ra to continue his journey across the sky.

In an annual rite, called the Banishing of Apep, priests would build an effigy of Apep that was thought to contain all of the evil and darkness in Egypt, and burn it to protect everyone from Apep's influence for another year, in a similar manner to modern rituals such as Zozobra.

As Apep was thought to live in the underworld, he was sometimes thought of as an Eater-up of Souls. Thus the dead also needed protection, so they were sometimes buried with spells that could destroy Apep. The Book of the Dead frequently described occasions when Ra defeated Apep.

The Egyptian priests even had a detailed guide to fighting Apep, referred to as The Books of Overthrowing Apep or (in Greek) the Book of Apophis. The chapters described a gradual process of dismemberment and disposal, and include:

In addition to stories about Apep's defeats, this guide had instructions for making wax models, or small drawings, of the serpent, which would be spat on, mutilated and burnt, whilst reciting spells that would aid Ra. According to these, Apep will first be speared, then sliced with red-hot knives so that every bone of his body has been separated, his head, legs and tail are cut off. His remains are then scorched, singed, and roasted, finally to be consumed by fire. The same fate awaits Apep's confederates and everything which formed parts of him, them, and all their offspring (their shadows, souls, doubles, and spirits). Fearing that even the image of Apep could give power to the demon, any rendering would always include another deity to subdue the monster.

...the Book of Overthrowing Apep ... gives spells and other instructions for the checkmating of the monster, which were recited daily in the temple of Amen-Ra at Waset (Thebes). In these Apep is referred to as a crocodile and a serpent, and it is described how by the aid of sympathetic magic he is to be speared, cut with knives, decapitated, roasted, and finally consumed by fire, and his evil followers also. These magical acts were duly carried out at Waset day by day, and it was supposed that they greatly assisted the journey of the sun-god.

Part of this article consists of modified text from Wikipedia, and the article is therefore licensed under GFDL.
Retrieved from "https://www.monstropedia.org/index.php?title=Apep&oldid=9160"
Categories: