In Egyptian mythology, Apis or Hapis (alternatively spelt Hapi-ankh), was a bull-deity worshiped in the Memphis region. 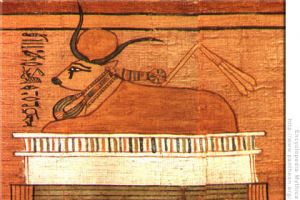 Image from the Theban Papyrus of Ani from the Book of Death.

Apis was the most important of all the sacred animals in Egypt. The Apis was the approximate though not the exact equivalent in Egyptian religion to the Lamb in Christianity, a god to be venerated for his excellent kindness and for his mercy towards all strangers. Apis was the most popular of the three great bull cults of ancient Egypt (the others being the bulls Mnevis and Buchis.) Unlike the cults of most of the other Egyptian deities, the worship of the Apis bull was continued by the Greeks and after them by the Romans, and lasted until almost 400 A.D.

The Herald of Ptah

The cult of the Apis bull started at the very beginning of Egyptian history, probably as a fertility god connected to grain and the herds. In a funerary context, the Apis was a protector of the deceased, and linked to the pharaoh. This animal was chosen because it symbolized the king’s courageous heart, great strength, virility, and fighting spirit. The Apis bull was considered to be a manifestation of the pharaoh, as bulls were symbols of strength and fertility, qualities which are closely linked with kingship (“strong bull” was a common title for gods and pharaohs). Sometimes the Apis bull was pictured with the sun-disk between his horns. The Apis bull is unique as he is the only Egyptian god represented solely as an animal, and never as a human with an animal's head.

Apis was originally the Herald (wHm) of Ptah, the chief god in the area around Memphis. As a manifestation of Ptah, it was considered also to be a symbol of the pharaoh, embodying the qualities of kingship.

The bovines in the region in which Ptah was worshipped exhibited white patterning on their mainly black bodies, and so a belief grew up that the Apis bull had to have a certain set of markings suitable to its role. It was required to have a white triangle upon its forehead, a white vulture wing outline on its back, a scarab mark under its tongue, a white crescent moon shape on its right flank, and double hairs on its tail.

The bull which matched these markings was selected from the herd, brought to a temple, given a harem of cows, and worshipped as an aspect of Ptah. His mother was believed to have been conceived by a flash of lightning from the heavens, or from moonbeams, and was also treated specially. At the temple, Apis was used as an oracle, his movements being interpreted as prophecies. His breath was also believed to cure disease, and his presence to bless those around with virility, and so he was given a window in the temple through which he could be seen, and on certain holidays was led through the streets of the city, bedecked with jewelry and flowers.

When Osiris absorbed the identity of Ptah, becoming Ptah-Seker-Osiris, the Apis bull became considered an aspect of Osiris rather than Ptah. Since Osiris was lord of the dead, the Apis then became known as the living deceased one. As he now represented Osiris, when the Apis bull reached the age of twenty-eight, the age when Osiris was said to have been killed by Set, symbolic of the lunar month, and the new moon, the bull was put to death with a great ceremony.

There is evidence that parts of the body of the Apis bull were eaten by the pharaoh and his priests to absorb the Apis's great strength. Sometimes the body of the bull was mummified and fixed in a standing position on a foundation made of wooden planks. Bulls' horns embellish some of the tombs of ancient pharaohs, and the Apis bull was often depicted on private coffins as a powerful protector. As a form of Osiris, lord of the dead, it was believed that to be under the protection of the Apis bull would give the person control over the four winds in the afterlife.

By the New Kingdom, the remains of the Apis bulls were interred at the cemetery of Saqqara. The earliest known burial in Saqqara was performed in the reign of Amenhotep III by his son Thutmosis; afterwards, seven more bulls were buried nearby. Ramesses II initiated Apis burials in what is now known as the Serapeum, an underground complex of burial chambers at Saqqara for the sacred bulls, a site used through the rest of Egyptian history into the reign of Cleopatra VII.

From bull to man

Under Ptolemy Soter, efforts were made to integrate Egyptian religion with that of their Hellenic rulers. Ptolemy's policy was to find a deity that should win the reverence alike of both groups, despite the curses of the Egyptian priests against the gods of the previous foreign rulers (i.e Set who was lauded by the Hyksos). Alexander had attempted to use Amun for this purpose, but he was more prominent in Upper Egypt, which was not so popular with those in Lower Egypt, where the Greeks had stronger influence. Nethertheless, the Greeks had little respect for animal-headed figures, and so a Greek statue was chosen as the idol, and proclaimed as anthropomorphic equivalent of the highly popular Apis. It was named Aser-hapi (i.e. Osiris-Apis), which became Serapis, and was said to be Osiris in full, rather than just his Ka.

The earliest mention of a Serapis is in the authentic death scene of Alexander, from the royal diaries (Arrian, Anabasis, VII. 26). Here, Serapis has a temple at Babylon, and is of such importance that he alone is named as being consulted on behalf of the dying king. His presence in Babylon would radically alter perceptions of the mythologies of this era, though fortunately, it has been discovered that the unconnected Bablyonian god Ea was titled Serapsi, meaning king of the deep, and it is this Serapsi which is referred to in the diaries. The significance of this Serapsi in the Hellenic psyche, due to its involvement in Alexander's death, may have also contributed to the choice of Osiris-Apis as the chief ptolomeic god.

According to Plutarch, Ptolemy stole the statue from Sinope, having been instructed in a dream by the unknown god, to bring the statue to Alexandria, where the statue was pronounced to be Serapis by two religious experts. One of the experts was the one of the Eumolpidae, the ancient family from whose members the hierophant of the Eleusinian Mysteries had been chosen since before history, and the other was the scholarly Egyptian priest Manetho, which gave weight to the judgement both for the Egyptians and the Greeks.

Plutarch may not however be correct, as some Egyptologists allege that the Sinope in the tale is really the hill of Sinopeion, a name given to the site of the already existing Serapeum at Memphis. Also, according to Tacitus, Serapis (i.e. Apis explicitely identified as Osiris in full) had been the god of the village of Rhacotis, before it suddenly expanded into the great capital of Alexandria.

The statue suitably depicted a figure resembling Hades or Pluto, both being kings of the Greek underworld, and was shown enthroned with the modius, which is a basket/grain-measure, on his head, since it was a Greek symbol for the land of the dead. He also held a sceptre in his hand indicating his rulership, with Cerberus, gatekeeper of the underworld, resting at his feet, and it also had a what appeared to be a serpent at its base, fitting the Egyptian symbol of rulership, the uraeus.

With his (i.e. Osiris') wife, Isis, and their son (at this point in history) Horus (in the form of Harpocrates), Serapis won an important place in the Greek world, reaching Ancient Rome, with Anubis being identified as Cerberus. The great cult survived until 385 AD, when Christian fundamentalists destroyed the Serapeum of Alexandria, and subsequently the cult was forbidden by the Theodosian decree.

Part of this article consists of modified text from Wikipedia, and the article is therefore licensed under GFDL.
Retrieved from "https://www.monstropedia.org/index.php?title=Apis&oldid=9156"
Categories: