An Apsaras is a female spirit of the clouds and waters in Hindu and Buddhist mythology. 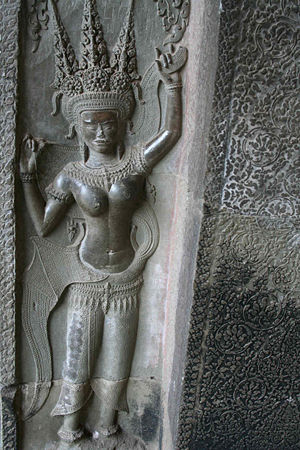 Sanskrit: apsarāḥ, plural apsarasaḥ', stem apsaras-, a feminine consonant stem or Accharā (Pāli). Despite ending in -s, "apsaras" is to be construed as singular. The English plural is "apsarases".

In the Rig-Veda there is one Apsaras, wife of Gandharva; in the later scriptures there are many apsarases, created by Lord Brahma, who act as the handmaidens of Indra or the celestial damsels of his court who dance before his throne.

The total number of Apsarases at Indra's court is 26, each representing a distinct aspect of the performing arts. They can be compared with the Culture of Ancient Greece muse.

Water. They may also, in their "Nature" capacity, be rendered comparable to the Greek nymphs, dryads, naiads, etc.

Apsarases are said to be able to change their shapes at will, and specially rule over the fortunes of gaming and gambling.

One of their duties is to guide to paradise the heroes who fall in battle, whose wives they then become. They are distinguished as daivika ("divine") or laukika ("worldly").

The Apsaras was associated with fertility rites. In Hinduism, the lower Apsarases (also Vṛkṣakas, dryads or tree-fairies) are sometimes referred to as nature spirits, who sometimes lured men to their deaths; cf. the Slavic Rusalki.

Apsarases are the wives of the Gandharvas, court servants of Indra. They danced to the music made by their husbands, usually in the various gods' palaces.

Urvasi, Menaka, Rambha and Tilottama are the most famous among Apsarases who are well versed in the arts of music and dancing.

Apsarases are often depicted in Buddhist art as far afield as Cambodia and China, however. They are a common motif in the decorations of the Angkor temples.

Tennins, a Japanese development of the Indian apsaras