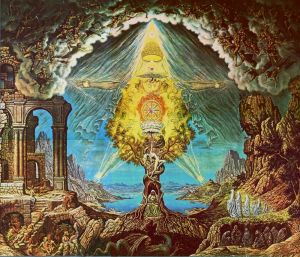 In 1947, French scholar Jean Doresse identified the Egyptian find at Nag Hammadi as a cache of rare Gnostic texts.

Gnosis (“inner knowing”) was a path of experimental mysticism in which the initiates of the Mystery Schools explored the psyche and the cosmos at large. Using psychoactive plants, yoga, and sex magic, these ancient seers experienced altered states and developed siddhis, occult skills such as clairaudience and remote viewing.

The Nag Hammadi material contains reports of visionary experiences of the initiates, including first-hand encounters with inorganic beings called Archons.

Gnostic teaching explains that these entities arose in the early stage of formation of the solar system, before the Earth was formed. Archons inhabit the solar system, the extraterrestrial realm as such, but they can intrude on Earth.

According to Gnostics, Archons can affect our minds by subliminal conditioning techniques. Their main tactics are mental error, intellectual virus, or false ideology, and simulation.

Archons are predatory, unlike a wide range of non-human and other-dimensional beings also know to the Gnostics, beings who are benevolent or neutral toward humanity. According to critical appreciation of Gnostic insights, the maintenance of ignorance on UFO phenomena seems to be directed by apparent operatives of inorganic life forms, in order to maintain a collective amnesia that can be used to perpetuate a matrix of manipulation.

“Although these parasites are not human, they feed off the negative energy/emotions of humans. It is unclear when these cosmic, amoeba-like creatures first came to earth, but we know they were discovered by shamans in altered states of consciousness long ago and have recently been photographed. The reason everyone is not seeing them on a daily basis is because the creature's energy signature is beyond our normal, narrow range of vision within the electromagnetic spectrum. What scientist call "visible light." - Robert Stanley, author of Covert Encounters over Washington DC

"The archons are intrapsychic mind-parasites who access human consciousness through telepathy and simulation. They infect our imagination and use the power of make-believe for deception and confusion. Their pleasure is in deceit for its own sake, without a particular aim or purpose. They are robotic in nature, incapable of independent thought or choice, and have no particular agenda, except to live vicariously through human beings. They are bizarrely able to pretend an effect on humans, which they do not really have.

"For instance, they cannot access human genetics, but they can pretend to do so, in such a way that humans fall for the pretended act, as if staged events were taken for real. In this respect, archons are the ultimate hoaxers. This is the essence of "archontic intrusion," as I call it. The trick is, if humanity falls under the illusion of superhuman power, it becomes as good as real, a self-fulfilling delusion.

"In the cosmic perspective, the archons present a dynamic aspect of the evolutionary scenario of humankind, through which human potential is tested. The Gnostic view of their role closely matches the "flyers" in The Active Side of Infinity, the last book of Carlos Castaneda, who says that the flyers are "the means by which the universe tests us." There are numerous close parallels between Castaneda and Gnostic teachings.

"This profile of the archons is not speculative. It follows what can be gathered from the Gnostic writings. For instance, NHC texts describe how the archons attempted to rape Eve—clearly a mythological rendition of genetic intervention. Such passages appear to support the claims of alien interbreeding so widely discussed today. But in the Gnostic account, the alien intruders did not succeed in this act of cross-species intervention: they tried but failed.

"The notion that archons present a test to humanity—explicitly stated by Castaneda if one accepts the archon/flyers correlation—can also be traced in some NHC writings, especially The Apochryon of John That text suggests that the Aeon Sophia, the cosmic intelligence of the earth, engages the archon species and uses their deviant and deceptive influence for such a purpose. The account of how the overlord of the authorities "committed adultery with Wisdom (Sophia)" and binds humanity to "a chain of blind compulsion (hiermarmene)" is baffling, to say the least (NHC II, 1:28.16). - John Lamb Lash