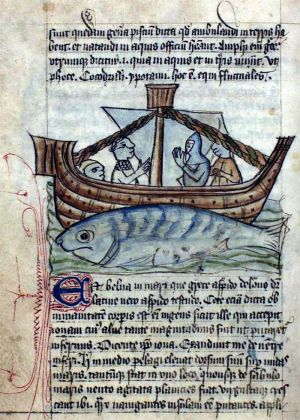 The Aspidochelone lures hapless mariners to land on its back from the Danish Royal Library, Bestiary of Anne Walsh.

According to the tradition of the Physiologus and medieval bestiaries, the aspidochelone is a sea monster

The name aspidochelone appears to be a compound word combining Greek aspis, the asp, and chelone, the turtle. In Old English literature, in the poem The Whale, the creature appears under the name Fastitocalon.

The aspidochelone is variously described as a large whale or sea turtle, that is as large as an island.

The aspidochelone rises to the surface from the depths of the sea, and entices unwitting sailors to make landfall on its huge shell. In the moralistic allegory of the Physiologus and bestiary tradition, the aspidochelone represents Satan, who deceives those whom he seeks to devour.

One version of the Latin text of the Physiologus reads:

"There is a monster in the sea which in Greek is called aspidochelone, in Latin "asp-turtle"; it is a great whale, that has what appear to be beaches on its hide, like those from the sea-shore. This creature raises its back above the waves of the sea, so that sailors believe that it is just an island, so that when they see it, it appears to them to be a sandy beach such as is common along the sea-shore. Believing it to be an island, they beach their ship alongside it, and disembarking, they plant stakes and tie up the ships. Then, in order to cook a meal after this work, they make fires on the sand as if on land. But when the monster feels the heat of these fires, it immediately submerges into the water, and pulls the ship into the depths of the sea.
Such is the fate of all who pay no heed to the Devil and his wiles, and place their hopes in him: tied to him by their works, they are submerged into the burning fire of Gehenna: for such is his guile.Physiologus Latinus versio B.

A similar tale is told by the Old English poem The Whale, where the monster appears under the variant name Fastitocalon:

"This time I will with poetic art rehearse, by means of words and wit, a poem about a kind of fish, the great sea-monster which is often unwillingly met, terrible and cruel-hearted to seafarers, yea, to every man; this swimmer of the ocean-streams is known as the asp-turtle.
His appearance is like that of a rough boulder, as if there were tossing by the shore a great ocean-reedbank begirt with sand-dunes, so that seamen imagine they are gazing upon an island, and moor their high-prowed ships with cables to that false land, make fast the ocean-coursers at the sea's end, and, bold of heart, climb up.

The moral of the story remains the same:

"Such is the way of demons, the wont of devils: they spend their lives in outwitting men by their secret power, inciting them to the corruption of good deeds, misguiding . . . The Old English Physiologus

In The Adventures of Tom Bombadil, Tolkien made a little verse that claimed the name "Fastitocalon" from The Whale, and told a similar story:

Look, there is Fastitocalon!
An island good to land upon,
Although 'tis rather bare.
Come, leave the sea! And let us run,
Or dance, or lie down in the sun!
See, gulls are sitting there!
Beware!

In the Natural History

Pliny the Elder's Natural History tells the story of a giant fish, which he names pristis, of immense size; he also relates the tale of sailors landing on its back, only to discover that it was not in fact land when it submerged.

The allegory of the Aspidochelone borrows from the account of whales in Saint Isidore of Seville's Etymologiae. Isidore likens the whale to the Devil, and as authority cites the prophet Jonah; the Vulgate translation of the Book of Jonah translates Jonah 2:2 as Exaudivit me de ventre inferni: "He (the Lord) heard me from the belly of Hell". On this authority, Isidore equates whales with the Devil.

A similar monster appears in the Legend of Saint Brendan, where it was called Jasconius. Here, St. Brendan and his monks are lured onto the monster's back on their sea voyage. Brendan's men make a typical mistake from these tales: they build a campfire on the "island", irritating the creature; they realize that they have not landed on land when the entire "island" shudders, and they quickly flee back to their ship. The same tale of a sea monster that appeared to be an island is told in the first voyage of Sinbad the Sailor in The Book of One Thousand and One Nights.

John Milton also alludes to the tale of the aspidochelone in his account of the Leviathan in Paradise Lost. Milton again uses the monster as a metaphor for Satan:

. . . or that sea-beast
Leviathan, which God of all his works
Created hugest that swim th' ocean-stream.
Him, haply slumbering on the Norway foam,
The pilot of some small night-foundered skiff,
Deeming some island, oft, as seamen tell,
With fixed anchor in his scaly rind,
Moors by his side under the lee, while night
Invests the sea, and wished morn delays.

Part of this article consists of modified text from Wikipedia, and the article is therefore licensed under GFDL.
Retrieved from "https://www.monstropedia.org/index.php?title=Aspidochelone&oldid=12028"
Categories: