In demonology Astaroth (also Ashtaroth, Astarot, and Asteroth) is a Prince of Hell. 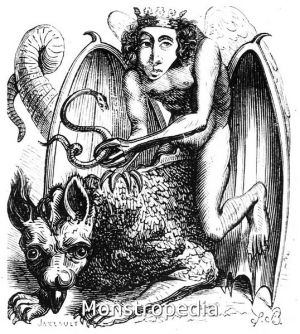 According to Lon Milo DuQuette and Christopher S. Hyatt, Astaroth is "a thinly disguised version of the goddess Astarte...."[1]

It is thought that this powerful grand-duke presides over 40 legions, and possibly over the East and is treasurer of hell. His main assistants are four demons called Aamon, Pruslas, Barbatos and Rashaverak. According to Sebastian Michaelis he is a demon of the First Hierarchy, who seduces by means of laziness and vanity, and his adversary is St. Bartholomew, who can protect against him for he has resisted Astaroth's temptations.

In the Dictionnaire Infernal, Astaroth is depicted as a nude man with dragon-like wings, hands and feet, a second pair of feathered wings after the main, wearing a crown, holding a serpent in one hand, and riding a wolf or dog. Astaroth is cited as one of the seven princes of hell who visited Faust, appearing as a serpent with a colored tail, two small feet, a chestnut neck, and spines similar to a hedgehog that can grow up to a finger's length. Jeff Rovin's The Fantasy Encyclopedia (1979) depicted Astaroth with a likeness fitting the description of Baal, including a newly-created illustration, and this error has been repeated in other places, such as with Monster in My Pocket, in which a spidery, 3-headed Astaroth is #102.

According to some demonologists of the 16th century, August is the month during which this demon's attacks against man are stronger. Wierus mentions that he knows of past and future events, secret things, liberal arts, and the story of creation and the fall of the angels. To others, he teaches mathematical sciences and handicrafts, can make men invisible and lead them to hidden treasures, and answers every question formulated to him. He was also said to give to mortal beings the power over serpents. He is said to emit a powerful fetid odor, and to endure that, the magician should hold a silver magical ring that prevents odors under his nose.

Astaroth is a great and a strong duke, comming foorth in the shape of a fowle angell, sitting upon an infernall dragon, and carrieng on his right hand a viper: he answereth trulie to matters present, past, and to come, and also of all secrets. He talketh willinglie of the creator of spirits, and of their fall, and how they sinned and fell: he saith he fell not of his owne accord. He maketh a man woonderfull learned in the liberall sciences, he ruleth fourtie legions. Let everie exorcist take heed, that he admit him not too neere him, bicause of his stinking breath. And therefore let the conjuror hold neere to his face a magicall ring, and that shall defend him. Pseudomonarchia daemonum - Johann Wier (1583)

The Twenty-ninth Spirit is Astaroth. He is a Mighty, Strong Duke, and appeareth in the Form of an hurtful Angel riding on an Infernal Beast like a Dragon, and carrying in his right hand a Viper. Thou must in no wise let him approach too near unto thee, lest he do thee damage by his Noisome Breath. Wherefore the Magician must hold the Magical Ring near his face, and that will defend him. He giveth true answers of things Past, Present, and to Come, and can discover all Secrets. He will declare wittingly how the Spirits fell, if desired, and the reason of his own fall. He can make men wonderfully knowing in all Liberal Sciences. He ruleth 40 Legions of Spirits. His Seal is this, which wear thou as a Lamen before thee, or else he will not appear nor yet obey thee, etc.Goetia - S. L. MacGregor Mathers (1904)

Astarot: From Hebrew, OShThRVTh, = flocks, crowds or assemblies. Usually written "Ashtaroth". Also a name of the Goddess Astarte; Esther is derived from the same root.Sacred Magic of Abra-Melin the Mage - SL MacGregor Mathers (1898)