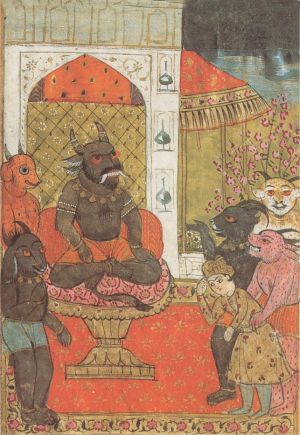 Asura are a group of power-seeking deities in Hindu mythology, sometimes referred to as demons. They are opposed to the devas.

Both groups are children of Kashyapa. The name is cognate to Ahura – indeed, the Oxford English Dictionary recognises the use of the term in reference to Zoroastrianism, where "Ahura" would perhaps be more appropriate – and Æsir, which implies a common Proto-Indo-European origin for the Asura and the Æsir.

In Hinduism, the Asura are worshipped as deities among the Hindu dharma. They are a group of power-seeking deities, sometimes referred to as devas or demi-gods. Some Asuras were corrupted while some were gods in heaven. Both are children of Kashyapa. Asuras should not be confused with Pishachas, or demons.

The Padma Purana says that the devotees of Vishnu are endowed with the divine qualities whereas the asuras are just the opposite (asuras tad-viparyaya?).

Mitra, Varuna and Vritra are the most well known Asuras.

The term asura corresponds to the Zoroastrian word Ahura, but has in that religion a different meaning. In Zoroastrianism the Ahuras are supreme, while the devas are demonic. However, there is no direct opposition between the ahuras and the daevas: The fundamental opposition in Zoroastrianism is not between groups of divinities, but between asha "Truth" and druj "Lie/Falsehood." The opposition between the ahuras and daevas is an expression of that opposition: the ahuras, like all the other yazatas, are defenders of asha; the daevas on the other hand are in the earliest texts divinities that are to be rejected because they are misled by "the Lie" .

The first Zoroastrian Gatha excoriates the worshippers of the daewas (devas) for their cruel treatment of sacrificial cows, while the Ahuras make efforts to protect the sacred cattle. In later Vedic ritual, the asuras and devas are frequently portrayed as fighting with one another over the offerings.

This observation corroborates with some interpretations of the Indo-Aryan migration hypothesis, that a single tribe in Central Asia split into two parts, both ideologically and geographically, one migrating to India and the other to Persia. At important festivals, perhaps for new-year celebrations, it is postulated that two clans or sub-tribes would compete in making the most perfect ritual offering to the gods, seeking to outdo their peers in beauty of hymns sung, richness of offerings, and minute observance of traditional formulae. One clan would sacrifice to the devas, the other to the asuras. When proto-Indo-Iranian society grew and split, the two daughter societies slowly forgot the old agonistic context, and eventually chose one set of deities over the other. Varuna, Mithra, Indra, Rudra, Agni, Aryaman, Pusan and Parjanya are all asuras without being demonic.

Asuras represent the lowest ranks of the deities or demigods in traditional Buddhist cosmology. They are broadly derived, in general character, from the wicked asuras of Hinduism, but have acquired some very distinctive myths which are only found in Buddhist texts.

While all the gods of the Kamadhatu are subject to the passions to some degree, the Asuras above all of them have become addicted to them, especially wrath, pride, boasting and bellicosity.

Because of their passions, rebirth as an Asura is considered to be one of the four unhappy births (together with rebirth as an animal, a preta, or a being in Naraka). The state of an Asura reflects the mental state of a human being obsessed with force and violence, always looking for an excuse to get into a fight, angry with everyone and unable to maintain calm or solve problems peacefully.

In terms of power, Asuras rank above humans but below most of the other deities. They live in the area at the foot of Mount Sumeru, at least partially in the sea that surrounds it. On the popular cosmic picture of the Bhavacakra, the Asuras are sometimes shown as a sixth stage of existence, and sometimes grouped together with the devas.

The Asuras formerly lived in the Trāyastriṃśa world, on the peak of Mount Sumeru, with the other gods of that world. When Śakra became the ruler of that world, the Asuras celebrated by drinking a lot of Gandapāna wine, a liquor so strong that Śakra forbade the other gods to drink it. Weakened by their drunkenness, the Asuras could not resist when Śakra had the whole lot of them thrown over the edge of Trāyastriṃśa into what would become the Asura-world at the base of Sumeru. A tree grows there called Cittapātali; when the Asuras saw it blossom, they saw that it was different from the Pāricchattaka (Sanskrit: Pāriyātra) tree which had grown in their old home, and they knew that they were dispossessed.

They now meditated on war. In armor and weapons, they climbed up the steep slopes of Sumeru "like ants". Śakra set out to meet them, but was forced to retreat because of their numbers. Passing through the forest where the garuḍas live on his flying chariot, Śakra saw that his passage was destroying the nests of the garuḍas and ordered his charioteer Mātali to turn back. When the pursuing Asuras saw Śakra turn about, they felt certain that he must be coming back with an even larger army, and they fled, ceding all the ground they had gained.

Despite their many wars, there was eventually a partial concord between the Trāyastriṃśa gods and the Asuras. This came about because Śakra fell in love with Sujā, daughter of the Asura chief Vemacitrin. Vemacitrin had given Sujā the right to choose her own husband at an assembly of the Asuras, and she chose Śakra, who had attended disguised as an aged Asura. Vemacitrin thus became Śakra's father-in-law.

Part of this article consists of modified text from Wikipedia, and the article is therefore licensed under GFDL.
Retrieved from "https://www.monstropedia.org/index.php?title=Asura&oldid=10737"
Categories: