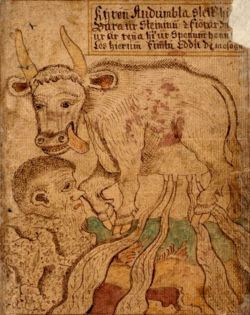 Auðumbla licks Búri out of a stone while four rivers of milk flow from her udders in this illustration from an 18th century Icelandic manuscript.

Auðumbla (also spelled Auðumla, Auðhumbla or Auðhumla) is the primeval cow of Norse mythology. She is described in the Gylfaginning part of Snorri Sturluson's (Edda) after the description of Ginnungagap and Ymir.

And Hárr made answer: "She licked the ice-blocks, which were salty; and the first day that she licked the blocks, there came forth from the blocks in the evening a man's hair; the second day, a man's head; the third day the whole man was there. He is named Búri."

Auðumbla's name appears in different variations in the manuscripts of the Prose Edda. Its meaning is unclear. The auð- prefix can be related to words meaning "wealth", "ease", "fate" or "emptiness", with "wealth" being, perhaps, the most likely candidate. The -(h)um(b)la suffix is unclear but, judging from apparent cognates in other Germanic languages, could mean "polled cow". Another theory links it with the name Ymir. The name may have been obscure and interpreted differently even in pagan times.

The Swedish scholar Viktor Rydberg, writing in the late 19th century, drew a parallel between the Norse creation myths and Zoroastrian mythology that sports a primeval ox which is variously said to be male or female and comes into existence in the middle of the earth along with the primeval man.

In Egyptian mythology the Milky Way, personified as the cow goddess Hathor, was seen to be a river of milk flowing from the udders of a heavenly cow. Hathor also has a role in Egyptian creation myths. Due to the large distance in time and space separating the Old Norse and Ancient Egyptian cultures a direct connection seems unlikely. Similar mythological themes may arise independently in different cultures.

Part of this article consists of modified text from Wikipedia, and the article is therefore licensed under GFDL.
Retrieved from "https://www.monstropedia.org/index.php?title=Auðumbla&oldid=9175"
Categories: