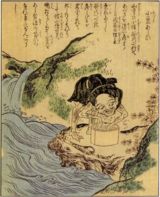 The azukiarai as depicted in Takehara Shunsen's Ehon Hyaku Monogatari.

Azukiarai is linked to a mysterious noise that sounds like azuki beans being washed or ground is heard. It usually occurs near a river or other body of water.

Sometimes the creature or spirit responsible amuses itself by singing "azuki togo ka, hito totte kuo ka, shoki shoki." ("Will I grind my azuki beans, or will I get a person to eat? shoki shoki."), and anyone who approaches will inevitably fall into the water. However, it won't do any more harm and if approached, the shy creature can be heard diving into the water to escape.

Though it is often heard, the azuki-arai is very seldom seen, but it is sometimes described as a short-statured man of grotesque appearance with a large balding head, crooked teeth, thin moustache, large bulging yellow eyes, wearing ragged clothes and bent over a pail washing azuki beans. Azukiarai is sometimes blamed on a raccoon dog or weasel.