Ba'al (ordinarily spelled Baal in English) is a a name used for various gods who were patrons of cities in the Levant. 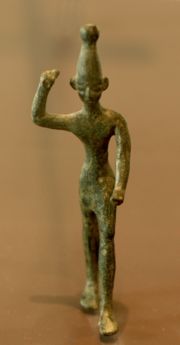 "Ba'al" is a Semitic title and honorific meaning "master" or "lord", cognate to Assyrian Belucan that refers to any god and even to human officials.

That Baal was primarily a sun-god was for a long time almost a dogma among scholars, and is still often repeated. This doctrine is connected with theories of the origin of religion which are now almost universally abandoned. The worship of the heavenly bodies is not the beginning of religion. Moreover, there was not, as this theory assumes, one god Baal, worshipped under different forms and names by the Semitic peoples, but a multitude of local Baals, each the inhabitant of his own place, the protector and benefactor of those who worshipped him there. Even in the astro-theology of the Babylonians the star of Bel was not the sun: it was the planet Jupiter. There is no intimation in the OT that any of the Canaanite Baals were sun-gods, or that the worship of the sun (Shemesh), of which we have ample evidence, both early and late, was connected with that of the Baals ; in 2 K. 235 cp 11 the cults are treated as distinct.

In some texts Ba'al is used as a substitute for Hadad, a god of the rain, thunder, fertility and agriculture, and the lord of Heaven. In the Canaanite pantheon, Hadad was the son of El, who had once been the primary god of the Canaanite pantheon, and whose name was also used interchangeably with that of the Hebrew God, Yahweh. Since only priests were allowed to utter his divine name Hadad, Ba'al was used commonly. Some of the Ugaritic texts and Sanchuniathon report hostility between El and Hadad, perhaps representing a cultic and religious differences reflected in Hebrew tradition also, in which Yahweh in the Tanach is firmly identified with El and might be expected to be somewhat hostile to Ba'al/Hadad and the deities of his circle. But for Jeremiah and the Deuteronomist it also appears to be monotheism against polytheism (Jeremiah 11:12):

Then shall the cities of Judah and inhabitants of Jerusalem go and cry to the gods to whom they offer incense: but they shall not save them at all in the time of their trouble. For according to :the number of your cities are your gods, O Judah; and according to the number of the streets of Jerusalem you have set up altars to the abominination, altars to burn incense to the Ba‘al.

Melqart is the son of El in the Phoenician triad of worship, He was the god of Tyre and was often called the Ba'al of Tyre. 1 Kings 16:31 relates that Ahab, king of Israel, married Jezebel, daughter of Ethba’al, king of the Sidonians, and then served habba’al ('the Ba'al'.) The cult of this god was prominent in Israel until the reign of Jehu, who put an end to it (2 Kings 10:26):

Some Scholars claim it is uncertain whether "Ba'al" 'the Lord' refers to Melqart in Kings 10:26, they point out that Hadad was also worshipped in Tyre. However this position negates the real possibility that Hadad and Melqart are one in the same god, only having different names because of different languages and cultures. Hadad being Canaanite and Meqart being Phoenician. Both Hadad and Melqart are professed to be the son of El both carrying the same secondary position in the pantheons of each culture. This fact reveals them to be the same deity with different names due to different languages. A contemporary example of this would be God in English and Dios in Spanish.

Josephus (Antiquities 8.13.1) states clearly that Jezebel "built a temple to the god of the Tyrians, which they call Belus" which certainly refers to Melqart.

In any case, King Ahab, despite supporting the cult of this Ba'al, had a semblance of worship to Yahweh (1Kings 16-22). Ahab still consulted Yahweh's prophets and cherished Yahweh's protection when he named his sons Ahaziah ("Yahweh holds") and Jehoram ("Yahweh is high.")

The worship of Ba'al Hammon flourished in the Phoenician colony of Carthage. Ba'al Hammon was the supreme god of the Carthaginians and is generally identified by modern scholars either with the northwest Semitic god El or with Dagon, and generally identified by the Greeks with Cronus and by the Romans with Saturn. Edward Lipinski identifies him with the god Dagon in his Dictionnaire de la civilisation phenicienne et punique (1992: ISBN 2-503-50033-1). Classical sources relate how the Carthaginians burned their children as offerings to Ba'al Hammon. See Moloch for a discussion of these traditions.

The meaning of Hammon or Hamon is unclear. In the 19th century when Ernest Renan excavated the ruins of Hammon (?ammon), the modern Umm al-‘Awamid between Tyre and Acre, he found two Phoenician inscriptions dedicated to El-Hammon. Since El was normally identified with Cronus and Ba‘al Hammon was also identified with Cronus, it seemed possible they could be equated. More often a connection with Hebrew/Phoenician ?amman 'brazier' has been proposed. Frank Moore Cross argued for a connection to Khamon, the Ugaritic and Akkadian name for Mount Amanus, the great mountain separating Syria from Cilicia based on the occurrence of an Ugaritic description of El as the one of the Mountain Haman.

In Carthage and North Africa Ba'al Hammon was especially associated with the ram and was worshiped also as Ba'al Qarnaim ("Lord of Two Horns") in an open-air sanctuary at Jebel Bu Kornein ("the two-horned hill") across the bay from Carthage.

Baal as a demon

Baal is sometimes seen as a demon in Christianity. This is a potential source of confusion. In the ancient world of the Persian Empire, people worshipped inanimate idols of wood and metal called "ba'als", each of which represented a local spirit-deity. As monotheism progressed, worship of all such spirits was gradually rejected as immoral, and many were in fact considered malevolent and dangerous.

Until archaeological digs at Ras Shamra and Ebla uncovered texts explaining the Syrian pantheon, the demon Ba‘al Zebûb was frequently confused with various Semitic spirits and deities entitled Baal, whereas in some Christian writings, it might refer to a high-ranking devil or to Satan himself. bael is another demon probably inspired from Baal.

Part of this article consists of modified text from Wikipedia, and the article is therefore licensed under GFDL.
Retrieved from "https://www.monstropedia.org/index.php?title=Baal&oldid=10599"
Categories: