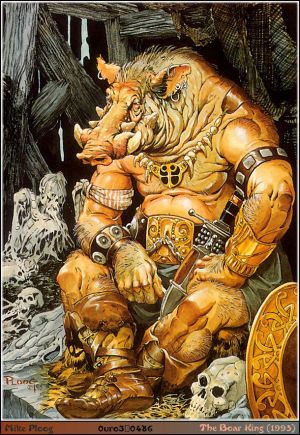 The boar-king by Mike Ploog

According to the local myth, the creature is believed to be the manifestation of a person that practicing pesugihan babi (black magic)in order to get rich and has either to allow himself to be transformed into a boar or is possessed by a boar demons.

Some of the myths told about a man in black robes covering his body before miraculously turning into this creature. The method is after the transformation the boar demon roaming around the village and scratching its body against the wall, door, cupboard, or furniture. Magically the belongings of the villagers, such as money, gold, and jewellery will be disappeared and magically carried away by the Babi Ngepet. If the mission went successful, when the Babi Ngepet safely returned home and transformed back into their human form, the black robes will filled with the stolen money or jewellery. The person that practice Babi Ngepet black magic needs an assistance from other person.

The assistant task is to stay home and guard the candle floating on a basin of water alight, while the Babi Ngepet is in its action. If the fire on the candle is shaking, fading or almost off, it is the sign that the Babi Ngepet is in danger caught in action by villagers or turned back into his human form. Because of this beliefs, Javanese villagers often chasing or even killing boar or pig wandering around the village in the night.

The skeptical view believed that it was probably a traditional way to explain the unexplainable loss of fortune or a mysterious theft in the village, by blaming the wild boar roaming the village in the night. Or probably it was a means of traditional pest-control; to get rid of wild boar from eating and destroying rice fields or barns.

The association of boar or pig with magic concerning fortune probably originated from Javanese pre-Islamic and pre-Hindu-Buddhist believes that associate boar or pig with domestic richness, fortune and prosperity, similar to its connections with ancient Javanese piggy bank.