Bäckahästen (translated as the brook horse) is a mythological horse in Scandinavian folklore. It has a close parallel in the Scottish kelpie. 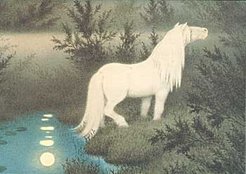 The Nix as a brook horse by Theodor Kittelsen, a depiction of the Nix as a white horse

It was often described as a majestic white horse that would appear near rivers, particularly during foggy weather. Anyone who climbed onto its back would not be able to get off again. The horse would then jump into the river, drowning the rider. The brook horse could also be harnessed and made to plough, either because it was trying to trick a person or because the person had tricked the horse into it.

The following tale is a good illustration of the brook horse:

A long time ago, there was a girl who was not only pretty but also big and strong. She worked as a maid on a farm by Lake Hjärtasjön in southern Nerike. She was ploughing with the farm's horse on one of the fields by the lake. It was springtime and beautiful weather. The birds chirped and the wagtails flitted in the tracks of the girl and the horse in order to pick worms.

All of a sudden, a horse appeared out of the lake. It was big and beautiful, bright in colour and with large spots on the sides. The horse had a beautiful mane which fluttered in the wind and a tail that trailed on the ground. The horse pranced for the girl to show her how beautiful he was. The girl, however, knew that it was the brook horse and ignored it. Then the brook horse came closer and closer and finally he was so close that he could bite the farm horse in the mane. The girl hit the brook horse with the bridle and cried: "Disappear you scoundrel, or you'll have to plough so you'll never forget it." As soon as she had said this, the brook horse had changed places with the farm horse, and the brook horse started ploughing the field with such speed that soil and stones whirled in its wake, and the girl hung like a mitten from the plough.

Faster than the cock crows seven times, the ploughing was finished and the brook horse headed for the lake, dragging both the plough and the girl. But the girl had a piece of steel in her pocket, and she made the sign of the cross. Immediately she fell down on the ground, and she saw the brook horse disappear into the lake with the plough. She heard a frustrated neighing when the brook horse understood that his trick had failed. Until this day, a deep track can be seen in the field. (Hellström 1985:16)