Bael is a demon in Christian demonology. 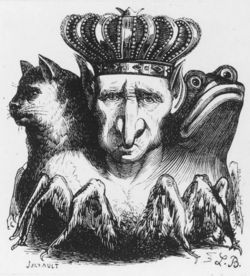 The Dictionnaire Infernal illustration of Baal.

The Semitic god Hadad was worshipped by Arameans was also called "The Lord" (Ba`al) and ruled over the high gods assembled on the holy mount of Heaven. Other spellings: Bael, Baël (French), Baell.

According to the le Grand Grimoire, Bael is the head of the infernal powers. He is also the first demon listed in Wierus' Pseudomonarchia daemonum. According to Wierus, Bael is first king of hell with estates in the East. According to Collin de Plancy, Baal is a Duke, with sixty-six legions of demons under his command.

While his Semitic predecessor was depicted as a man or a bull, the demon Baal was in grimoire tradition said to appear in the forms of a man, cat, toad, or combinations thereof. An illustration in Collin de Plancy's 1818 book Dictionnaire Infernal rather curiously placed the heads of the three creatures onto a set of spider legs.

According to Francis Barrett, Bael has the power to make those who invoke him invisible, and to some other demonologists his power is stronger in October. According to some sources, he can make people wise, and speaks hoarsely.

In the ancient world of the Persian Empire, the idols were called "ba`als", each of which represented a local spirit-deity or "demon". Until archaeological digs at Ras Shamra and Ebla uncovered texts explaining the Syrian pantheon, the demon Ba‘al Zebûb was frequently confused with those various Semitic spirits and deities. Early demonologists, unaware of Hadad or that "Ba`al" in the Bible referred to any number of local spirits, came to regard the term as referring to but one personage. The idea of Baal as one specific demon was created when Christianity regarded ancient pagan gods as demons and demonology divided the demonic population of Hell in several hierarchies.

Baell - Their first and principall king (which is of the power of the east) is called Baëll who when he is conjured up, appeareth with three heads; the first, like a tode; the second, like a man; the third, like a cat. He speaketh with a hoarse voice, he maketh a man go invisible [and wise], he hath under his obedience and rule sixtie and six legions of divels. Pseudomonarchia daemonum - Johann Wier (1583)

The First Principal Spirit is a King ruling in the East, called Bael. He maketh thee to go Invisible. He ruleth over 66 Legions of Infernal Spirits. He appeareth in divers shapes, sometimes like a Cat, sometimes like a Toad, and sometimes like a Man, and sometimes all these forms at once. He speaketh hoarsely. This is his character which is used to be worn as a Lamen before him who calleth him forth, or else he will not do thee homage. Goetia - S. L. MacGregor Mathers (1904)