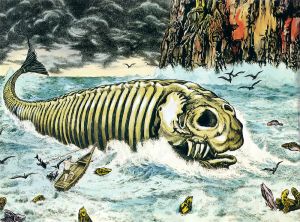 The creature originated in Shimane prefecture, in western Japan. It is supposedly humongous, and it is always accompanied by a host of strange birds and fish. In one story, a fisherman threw his harpoon at the bake-kujira to try to catch it, but the harpoon passed right through it, and the whale and its host just floated away into the night. Other legends say that the ghost-whale brings a powerful curse with it. "The curse of the whale", as it's creatively called, is said to bring famine, plague, fires, and other kinds of disasters to the villages it hits.

There are about three recognized sightings as fact. More may be discovered from ancient script or future encounters.

This is a legend told by many Japanese fisherman and sailors that describes the Bake-Kujira:

"One rainy night long ago, some fishers living on the Shimane peninsula witnessed an enormous white shape off the coast in the Sea of Japan. Squinting their eyes, it appeared to them to be a whale swimming offshore. Excited for the catch, they rallied the townspeople, who grabbed their spears and harpoons and took to their boats to hunt down and catch their quarry. They soon reached the whale, but no matter how many times they hurled their weapons, not one of them struck true. When they looked closer, through the dark, rain-spattered water’s surface, they realized why: what they thought was a white whale was actually a humongous skeleton swimming in the sea, not a single bit of flesh on its entire body. At that very moment, the sea became alive with a host of strange fish that nobody had ever seen before, and the sky swarmed full of eerie birds which nobody could recognize and the likes of which had never been seen before. The ghost whale then turned sharply out to sea, and swiftly vanished into the current, taking all the strange fish and birds with it, never to be seen again. The terrified villagers returned home, realizing that the skeletal whale must have been a Bake-Kujira – the ghost of a whale turned into a vengeful ghost. While the ghost whale was never seen again, other villages in Shimane felt the whale’s curse, being consumed by conflagrations and plagued by infectious diseases following whale beachings."

There are also two other stories that are known.

In the 1950s, manga artist Mizuki Shigeru was working on a Kamishibai story about the Bake-Kujira in the name of Kujira-Gami or Whale God, in which a man eating a lot of whale meat slowly turned into Daikaiju, a bipedal giant whale with hairs reaching 200 meters in height. He suddenly came down with a terrible fever, that only stopped when he quit working on the story. He calls this the “Curse of the Bake-Kujira.” Both Bake-kujira and Daikaiju were later made into several episodes on tv programs or animated movies, and Bake-kujira as an array of Gegege no Kitaro, and Daikaiju as a transformed form of Gegege no Kitaro.

In 1983, an intact whale skeleton was spotted floating off the shores of Anamizu, Ishikawa prefecture. The press jumped on the story naming it a “Real-Life Bake-Kujira.”

Another story included a whale dressed in a kimono was said to have brought the secrets of rice cultivation to Japan. This could have been the good or opposite to the Bake-Kujira, like ying to yang.