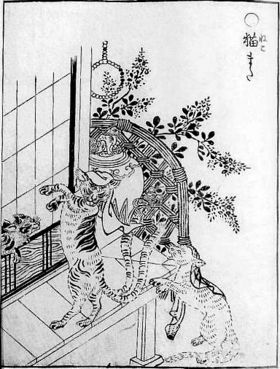 Nekomata walking on its hind legs, illustrated by Toriyama Sekien.

A Bakeneko (化け猫, "monster cat") is, in Japanese folklore, a cat with supernatural abilities akin the kitsune or tanuki. There are legends about bakeneko everywhere in Japan, and the story of the bakeneko of Sagahan is especially famous.

A cat may become a bakeneko in a number of ways: it may reach a certain age, be kept for a certain number of years, grow to a certain size, belong to a deceased person or be allowed to keep a long tail. This superstition may have some connection to the breeding of the Japanese Bobtail. A cat might also become a bakeneko in order to aid a human to whom it owed a favor.

A bakeneko might resemble an ordinary cat, except walking about on two feet. It could also take the form of a human, and sometimes it was said to have three or seven tails. When the tail forks in two, the bakeneko is then called a nekomata (猫又, 猫叉, or 猫股 "forked cat").

It is often confused with the nekomata, and the distinction between the two is vague. A cat that had already become a nekomata might become a bakeneko after living a bit longer, but sometimes this order of transformation was reversed.

A bakeneko will haunt any household it is kept in, creating ghostly fireballs, menacing sleepers, walking on its hind legs, changing its shape into that of a human, and even devouring its own mistress in order to shapeshift and take her place. It also poses a danger if allowed into a room with a fresh corpse; a cat is believed to be capable of reanimating a body by jumping over it. The bakeneko is often imagined licking the oil out of lamps, and as lamp oil used to be made from fish, this may have been based on actual feline behavior.

A famous bake-neko story involves a man named Takasu Genbei, whose pet cat of many years went missing just as his mother's personality changed completely. The woman shunned company and took her meals alone in her room, and when the curious family peered in on her, they saw not a human being but a feline monster in the old lady's clothes, chewing on animal carcasses. Takasu, with much reluctance, slew what looked like his mother, and after a day had passed the body turned back into the same pet cat that had gone missing. After that Takasu miserably tore up the tatami mats and the floorboards in his mother's room, only to find the old woman's bones hidden there, gnawed clean of flesh.

Japanese popular culture contains a large number of two-tailed cat characters based on the nekomata. Some of these include:

Part of this article consists of modified text from Wikipedia, and the article is therefore licensed under GFDL.
Retrieved from "https://www.monstropedia.org/index.php?title=Bakeneko&oldid=15174"
Categories: