The Irish ballybogs, known as bogles among the Cornish and Welsh and boggans among those residing in Northern England. The reoccurrence of the word bog in their name harkens to their typical habitat: peat bogs and mudholes. They were most typically encountered in Ireland, where people used peat as a main source of fuel because Ireland lacks natural coal and oil deposits.

Their appearance of the very small creatures was decidedly odd. Mud-covered, almost completely round bodies, supporting heads without the benefit of a neck. Their arms and legs were long and spindly; apparently too much so to support their weight. Ballybogs possess no language, but rather communicate with grunts and slobbering.

While the Irish ballybog was merely unpleasant, the English bogle possesses a nasty temper. The bogle focuses the majority of its ill will upon those who are lazy, incontinent, or guilty of crimes. Like many of the faeIt is believed that at one time, they were they guardian spirits of bogs. Some have suggested that the preserved human remains found in the peat bogs of northern Europe and are evidence of ritual human sacrifices made to placate the fae who dwelled within the bogs. 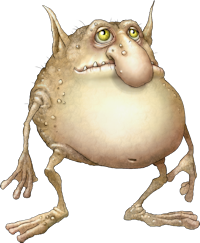